England were knocked out of the ICC Women's T20 World Cup on Thursday after a game was not possible because of persistent rain.

England cricketer Stuart Broad and former captain Michael Vaughan were not impressed with the lack of a reserve day for the Women's T20 World Cup semi-finals, which resulted in England getting knocked out of the tournament without a ball being bowled on Thursday at the Sydney Cricket Ground.

England were knocked out because they finished second in their Group and the rules suggested that the leaders of the groups will go to the final if there is a washout in the semis. With no play possible, India progressed into the summit clash courtesy of topping Group A. England finished behind South Africa in Group B.

Broad and Vaughan took to social media to express their frustration at the situation and were critical of the International Cricket Council's decision to not have a reserve day. 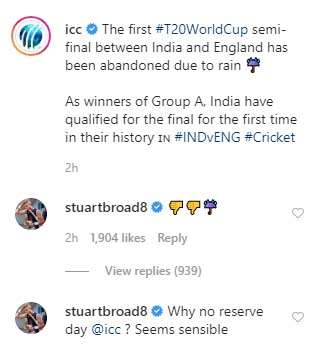 Vaughan, on the other hand, took to Twitter to express his frustration.

"No reserve days for World Cup semi Finals... What a shambles," Vaughan tweeted.

The weather forecast in Sydney hasn't been great for a while and Cricket Australia did ask for a reserve day but it was turned down by the ICC.

"We have asked the question and it's not part of the playing conditions. I respect that because we have said the same thing in tournaments that we run in Australia," ESPNcricinfo quoted Cricket Australia chief executive Kevin Roberts as saying on the radio station SEN.

"It gives you cause to reflect on how you might improve things in the future absolutely, but going into a tournament with a given set of playing conditions and rules I don't think it's time to tinker with that as much as with an Australian hat on I might love that," he added.

An ICC spokesperson said that extending the tournament was not feasible and hence the request was declined.

"The ICC T20 World Cups are short sharp events where reserve days are factored in for the final. Allowing for any other reserve days would have extended the length of the event, which isn't feasible."

"There is a clear and fair alternative should there be no play in any of the semi-finals with the winner of the group progressing."