According to a research paper published in Current Science Journal, the spacecraft with the help of an Imaging infrared spectrometer (IIRS) could differentiate between hydroxyl and water molecules.

Chandrayaan-2, Water in Moon Latest News: In a stunning new discovery, the Indian Space Research Organisation’s (ISRO) homegrown instrument aboard Chandrayaan-2 has detected presence of hydroxyl (OH) and water molecules (H2O) on the Moon. Thanks to its range of 0.8-3 micrometers, the spectrometer successfully distinguished the two without any ambiguity.

The instrument can operate between the wavelength of 0.8 to 5 micrometre, which enhances the ability to precisely distinguish between OH (hydroxyl) and H2O (water) molecules.

The data was collected by the Imaging infrared spectrometer (IIRS), developed by Ahmedabad-based Space Applications Centre (SAC) of ISRO from the electromagnetic spectrum obtained from the lunar surface, further used to detect mineral composition.

According to a research paper published in Current Science Journal, the spacecraft with the help of an Imaging infrared spectrometer (IIRS) could differentiate between hydroxyl and water molecules.

The researchers said, "The initial data analysis from IIRS clearly demonstrates the presence of widespread lunar hydration and unambiguous detection of OH and H2O signatures on the Moon between 29 degrees north and 62 degrees north latitude".

The researchers informed, "The proper interpretation of hydration feature through spectral analysis is significant as it provides important inputs regarding the geology and geophysics of the mantle in terms of their mineralogy, chemical composition, rheology, and solar-wind interaction". 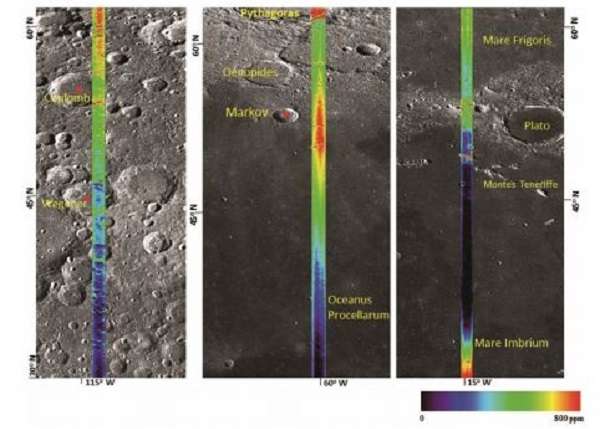 Chandrayaan-2 is ISRO’s second mission to the Moon, which was launched on July 22, 2019, from the Satish Dhawan Space Centre, Sriharikota. “It includes an orbiter, lander and rover for detailed analysis of lunar topography, mineralogy, surface chemistry, regolith’s thermophysical characterisation and atmospheric composition,” according to the ISRO scientists who also presented their findings in the 52nd Lunar and Planetary Science Conference.

However, the rover part of the mission ended when it crash-landed on the surface. While the lander and rover did not survive the crash, the orbiter is still hovering above the Moon, leading to path-breaking new discoveries. Meanwhile, ISRO is set to launch Chandrayaan-3 a successor to the second mission likely in the next year.