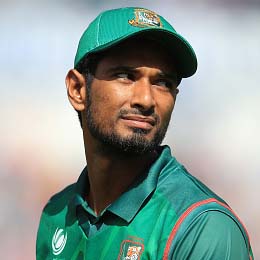 Since making his first-class debut at the age of 19, Mahmudullah hasn't exactly been a consistent performer, but has delivered when the team needs a saviour. He started off his career as a bowler, but found his potential with the bat and ever since then, he has been hammering away. He made his international debut for Bangladesh in an ODI against Sri Lanka in 2007 and made an immediate impact. He performance saw him being selected for the T20 World Cup in Kenya that year. He was dropped later on, but was called back after impressive knocks in domestic cricket. After the 2011 World Cup, the batsman was named vice-captain and since then has had a rocky path. But he stunned all with his performances in the 2015 World Cup and was by far the best Bangladesh batsman. A handy lower-order batsman who has played over 150 ODIs for Bangladesh and has played 40 Tests, scoring 2000+ runs and one century to his name.