Anti-CAA protests planned in 30 US cities on Republic Day

The Indian consulates in the cities of Houston, New York, Chicago, Washington, Atlanta and San Francisco are expected to witness demonstrations against CAA on Republic Day. Anti-CAA protests are also scheduled to take place in major European cities

Protestors will take to streets of 30 American cities across the length and breadth of the country on Jan 26, in a bid to make their opposition to the Citizenship Amendment Act, 2019, known. According to the organisers, demonstrations will also be organised at Indian consulates in the cities of Houston, New York, Chicago, Washington, Atlanta and San Francisco.

The protestors are being brought together by groups 'National Campaign Against India’s Draconian Citizenship Amendment Act' and ‘Coalition to Stop Genocide’, the latter identifying itself as an umbrella coalition of various organisations working towards promoting human rights in India and the US. 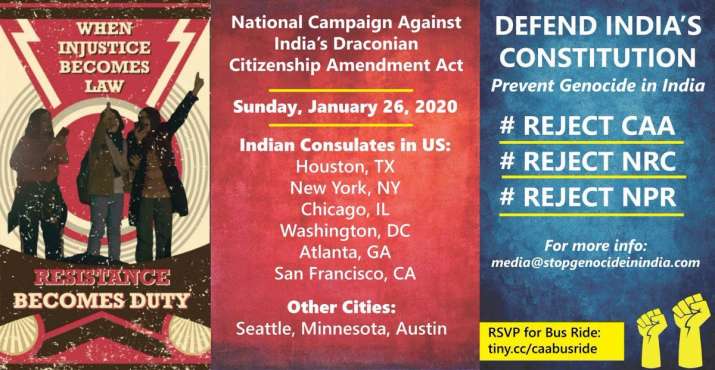 Besides protests in the US, critics of the new Act will also hold demonstrations across major European cities. Yogendra Yadav, the head of Swaraj India Abhiyan, on Saturday tweeted a post on a planned protest on Sunday at a World War 2 era landmark in Hamburg, Germany.

On its part, the Indian government has expressed concerns over a planned protest in London. At his weekly media briefing, Ministry of External Affairs (MEA) spokesperson Raveesh Kumar said on Thursday that the Centre has asked the authorities in the United Kingdom to provide adequate security to Indian officials so “no untoward incident” takes place.

"You are aware that there has been an incident that has happened in the past and we have taken up the matter very strongly with the UK Foreign Office. This was again done by the High Commissioner of India in London,” said Kumar, referring to a protest at the Indian High Commission on September 4 last year. The protestors turned rowdy and were accused of verbally assaulting and attacking the Indian officials.

The protest organisers in London have reportedly put up huge banners at the Indian High Commission, calling upon others to mark this year’s Republic Day as “Burn the Constitution Day.”