10 controversial comments made by Donald Trump

New York: Long before the New Hampshire primary victory came along, the flamboyant-yet-controversial real estate mogul, Donald J. Trump, has lived in the news owing to his over-the-top theatrics at presidential debates and irksome comments.‘Racist',

New York: Long before the New Hampshire primary victory came along, the flamboyant-yet-controversial real estate mogul, Donald J. Trump, has lived in the news owing to his over-the-top theatrics at presidential debates and irksome comments.

‘Racist', ‘sexist', ‘bigot'…or even ‘worse than Voldemort' are only few of the references made about the Republican front-runner in the 2016 U.S Presidential Election.

A man with a twitter following of over 6 million users and net worth of approximately £5.7bn, Trump has possibly become one of the most loved/hated GOP contenders running against the likes of fellow Republican and brother of former president, Jeb Bush and Former Secretary of state Hillary Clinton, the Democratic candidate.

Having this reputation of being bold and brash, Donald Trump has made some of the most controversial comments during  his presidential campaign.

Here goes a list of 10 such comments made by Donald Trump:

1. "If Hillary Clinton can't satisfy her husband what makes her think she can satisfy America?"

-Trump tweeted on April 16. He took the tweet down soon after.

2. "Donald J. Trump is calling for a total and complete shutdown of Muslims entering the United States until our country's representatives can figure out what is going on,"

- Trump made this controversial comment on Dec. 7 in South Carolina, during his speech regarding the banning of Muslims from entering the U.S mainland.

-Trump made this outrageous comment, on November 2015, claiming he saw people in the U.S cheering 9/11.

4. "Hey, I'm not saying they're stupid … I like China. I just sold an apartment for $15 million dollars to somebody from China. Am I supposed to dislike 'em?"

- Trump said when he announced his bid for the presidency in June, 2015 on the topic of China “ripping away” U.S jobs and on the debate of having tougher negotiation position with the country.

5. “Sadly, the overwhelming amount of violent crime in our major cities is committed by blacks and hispanics-a tough subject-must be discussed.”

6. “How much money is the extremely unattractive (both inside and out) Arianna Huffington paying her poor ex-hubby for the use of his name?”

-Trump tweeted on April 7 about Huffington Post's co-founder, Arianna Huffington. This was in response to HP article critical of Trump.

7. “Look at that face! Would anyone vote for that? Can you imagine that, the face of our next president?"

-Trump to opponent Carly Fiorina, in September 2015, during an interview with Rolling Stone.

8. "13 Syrian refugees were caught trying to get into the U.S. through the Southern Border. How many made it? WE NEED THE WALL!"

-Trump tweeted on November 22 referring to his immigration bans on refugees piling in from Syria and other North African countries.

-Trump said on February 14, 2016, in a Republican candidate debate regarding Bush administration and 9/11. During this debate, Trump was, despite being booed (again) was considered to have finally gone too far in making a bold and provocative claim. However, this one could be among the harsh truth of the US government. 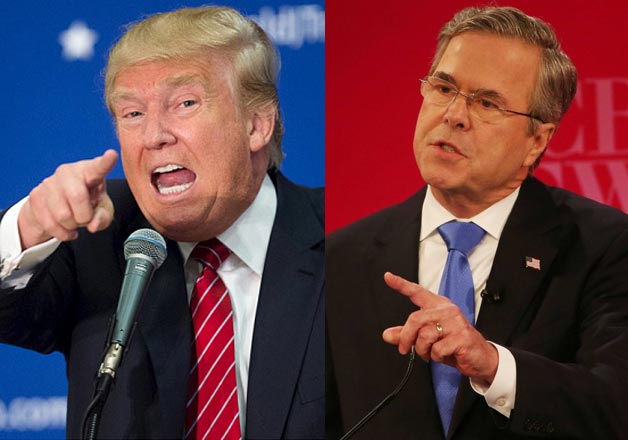 - Trump commented about Mexican immigration in June 2015 during a speech made at his presidential campaign where he referred to Mexicans as ‘rapists'.

Read all the Breaking News Live on indiatvnews.com and Get Latest English News & Updates from World