The Delhi Police have not revealed the name of the masked woman involved with violence at the JNU campus. They have said she will soon be served a notice to join investigations in the case. Masked men and women had attacked the JNU campus and hostels on January 5. Several students and teachers were thrashed, while 34 people were admitted to the hospital following the attack.

The Delhi Police have identified a woman, involved in the violence at the Jawaharlal Nehru University on January 5. JNU had come under attack by a masked mob after a group of masked men and women barged into the university campus and hostels. They thrashed students and faculty members, following which nearly 34 people were admitted to the hospital.

Now, the police have identified a masked woman who was a part of the mob at the university campus. Her photos were widely shared by Left outfits following the violence.

According to the police, the woman is a student at Delhi University and will soon be served notice to join further investigations. The police, however, have not revealed the name of the woman.

In the videos that had gone viral, the said woman was seen wearing a check shirt. She had covered her face with a blue scarf. While the mob tries to push students, the person who shot the video points the camera at the masked woman and says, “She’s the girl who said she is a JNU student but she’s not… piche ja (go back).”

The masked woman was also recorded as saying, “Kya bolegi?” after the mob threatened the students and teachers inside the JNU campus.

The two-minute video was shot in a corridor, where pieces of glass and broken furniture can also be seen.

A senior officer said, “The woman was identified through one of the videos of the incident. She lives in the North Campus area. We approached her during the day but she was not home; her phone is switched off. We will send her a legal notice and ask her to come for questioning.”

The Delhi Police have also identified 37 students from a WhatsApp group created during the January 5 violence on the JNU campus, sources said. They said the identified people do not belong to any left or right-leaning organisations. Those identified are students who were in favour of the semester registration process and wanted to enrol themselves, the sources said.

On Friday, police said the WhatsApp group 'Unity Against Left', believed to have been created while the violence escalated on the JNU campus, was under the scanner. 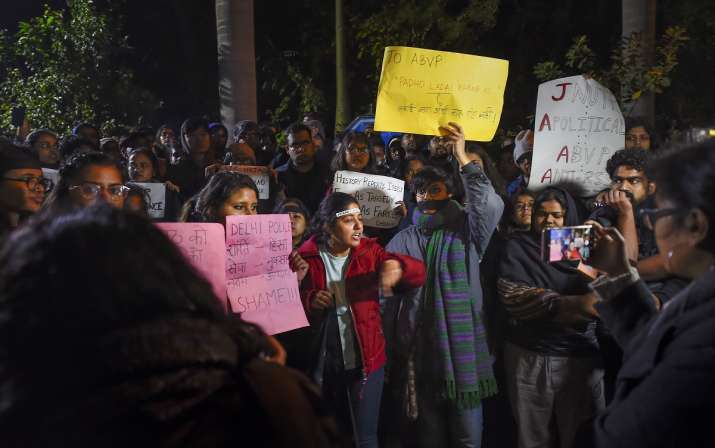 Addressing a press conference, the police had claimed that nine students, seven of whom are from Left-leaning bodies including JNUSU president Aishe Ghosh, were identified as suspects in the violence on the varsity campus.

The preliminary findings in the probe by a Special Investigation Team (SIT) of the police also released pictures of the nine suspects.

The police also claimed that the violence was a fallout of the online registration process and that tension was brewing in the university since January 1.

The students' union of JNU, however, had termed the press conference as bogus.

Several students of the varsity said that they had received notices from Delhi Police seeking a meeting with them in the next few days.