Jawaharlal Nehru University’s (JNU) Vice-Chancellor is not a particularly liked figure among the varsity students and teachers alike. Calls for his resignation, which were already dime a dozen before the episode of violence on the university premises, have further intensified after last Sunday.

Earlier in the day, Congress stated in a fact-finding report into last Sunday’s incident that Kumar had been the “mastermind” behind the unprecedented assault on the university premises. The party, thus, joined the long list of critics, which include the Jawaharlal Nehru Students’ Union (JNUSU) and the university’s teachers’ association (JNUTA), demanding Kumar’s sacking.

If one digs into the past of the vice-chancellor, one finds that Jagadesh Kumar is no stranger to controversy. A newspaper clipping dated October 24, 2002, doing the rounds of WhatsApp groups, reveals that Kumar faced a mass boycott from hostel mates of Nilgri Hostel, Indian Institute of Technology- Delhi (IIT-D), after he reportedly slapped a first-year engineering student.


Reporting on the incident back then, The Indian Express quoted other students as saying that Kumar slapped the first-year student after he overheard him using a slang while speaking to a friend of his. Kumar’s action, however, didn’t go down well with other students, around 400 of who demanded that he be made to step down. 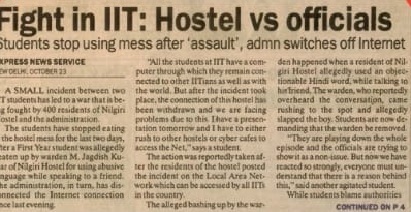 The protesting students didn’t dine at the hostel mess for at least two days. Instead of working out at amicable solution, the administration snapped the internet facility of the hostel where Kumar was the warden.

Reporting on the same incident on Sunday, the Indian Express quoted a student who was part of the protest as saying that frustration against Kumar had been building in the lead-up to the incident. The former student said that a series of decisions taken by Kumar, including levying penalties on late payment of hostel and mess fee, had angered the students a great deal.

The Express reported that after an enquiry by IIT-Delhi, Kumar was asked to step down.