As outrage intensified on Friday over the rape, murder and hurried cremation of a 19-year-old girl, the Uttar Pradesh police is facing the heat over the way it has been handling the case. Hathras remained centrestage of discussions as the government suspended top police officials while nation put forth its demand before the government to ensure justice to the victim.

As outrage intensified on Friday over the rape, murder and hurried cremation of a 19-year-old girl, the Uttar Pradesh police is facing the heat over the way it has been handling the case. The judiciary has also stepped in as a nationwide anger continues against the brutal crime, pointing fingers at the state of law in Uttar Pradesh. Meanwhile, the Lucknow bench of the Allahabad High Court on Thursday cited a report aired on Aaj Ki Baat, an India TV programme anchored by Editor-in-Chief and Chairman Rajat Sharma, and issued a notice to the Uttar Pradesh government over forcible cremation of the rape victim and other issues. At the same time, on Friday also, Hathras remained centrestage of discussions as the government suspended top police officials while nation put forth its demand before the government to ensure justice to the victim. 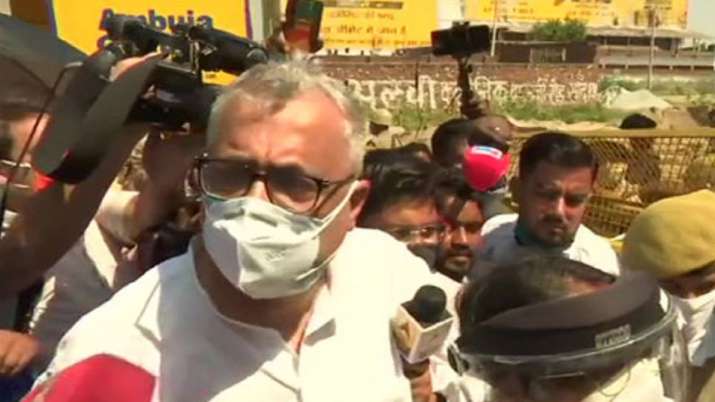 A bench of justices Rajan Roy and Jaspreet Singh issued summons to the Uttar Pradesh additional chief secretary, director general of police and additional director general of police, asking them to be present before the court on October 12 to explain the case. The bench also ordered the Hathras district magistrate and senior superintendent of police to appear before it. The bench asked all officials to come prepared with all the relevant material and documents to apprise the court of their versions of the incident. Upset over the police cremating the teen’s body overnight allegedly forcibly in Hathras without her parent’s consent, the bench also asked officials to apprise the bench of the latest status of the probe into the alleged gang-rape and murder case. The bench also asked the late teen’s parent to come to the court to apprise it of their version of the incident and ordered the Hathras district administration to arrange for their travel to the court.

"In this very context we may also refer to an electronic media programme shown on India TV channel by the name "Aaj Ki Baat" where the anchor Shri Rajat Sharma dwelled on the issue of alleged forcible cremation of the deceased victim at length and in the said programme videos which were recorded on the spot at the time the deceased victim's body arrived in the village and her cremation indicating the forcible cremation without the family members being allowed to participate, that too, in the midst of the night contrary to the religious practices followed by the family, have been shown. The family members were shown as stating that cremation is not carried out after sunset and before day break and that the body of the deceased should be taken to their home, but this was not done."

The Uttar Pradesh police has said that the forensic report revealed that the Hathras woman who succumbed to her injuries at a Delhi hospital was not raped. Citing a forensic science laboratory (FSL) report, ADG (Law and Order) Prashant Kumar said the cause of her death is an injury on the neck and trauma resulting due to it.

"The report of the FSL has come. It says clearly that samples did not have sperm. It makes clear that there was no rape or gang rape. Even the woman in her statement to police did not mention about rape but talked about 'marpeet' (beating) only," he said.

Laxkar, however, refused to admit about his interactions. "I met with 6 family members of the victim yesterday (Wednesday) and we spoke for about an hour and a half. I met with them again today (Thursday) to see their point of discontent. I deny the negative rumours which are rife about my interactions with them," he said.

Their main point of apprehension is that the convicted must be punished and be hanged to death. I tried to allay their fears and told them that the matter would be tried in a fast track court, he further added.