AN-32 aircraft crash: Rescue and search operation by helicopters commences

The wreckage of the AN-32 aircraft of the Indian Air Force was spotted on Tuesday in a heavily forested mountainous terrain in Arunachal Pradesh, eight days after it went missing with 13 people on board after taking off from Assam's Jorhat.

Rescue operation by helicopters commences at the crash site of Indian Air Force’s (IAF) AN-32, on Wednesday. Mi17s and Advanced Light Helicopters (ALH) of the Indian Army are being utilised, reported ANI.

The wreckage of the AN-32 aircraft of the Indian Air Force was spotted on Tuesday in a heavily forested mountainous terrain in Arunachal Pradesh, eight days after it went missing with 13 people on board after taking off from Assam's Jorhat.

Wreckage of missing IAF AN-32 found in Arunachal, fate of 13 onboard unknown

From Jaguar to AN-32, IAF lost nearly 10 aircraft this year

Wreckage of missing AN-32 plane found after 8 days, but are there any survivors?

The IAF said efforts are on to establish the status of occupants amid fears of that chances of any survivor in the one of worst accidents involving a military platform in recent years may be very bleak.

"The wreckage of the aircraft was spotted today 16 kms North of Lipo, North East of Tato at an approximate elevation of 12,000 feet by an IAF Mi-17 helicopter undertaking search in the expanded search zone," the IAF said in a statement.

"Efforts are now continuing to establish the status of occupants and establish survivors," it said.

An IAF official said after identifying the wreckage of the AN 32, a Cheetah helicopter and an ALH chopper reached the crash site but could not land due to high elevation and dense forest. 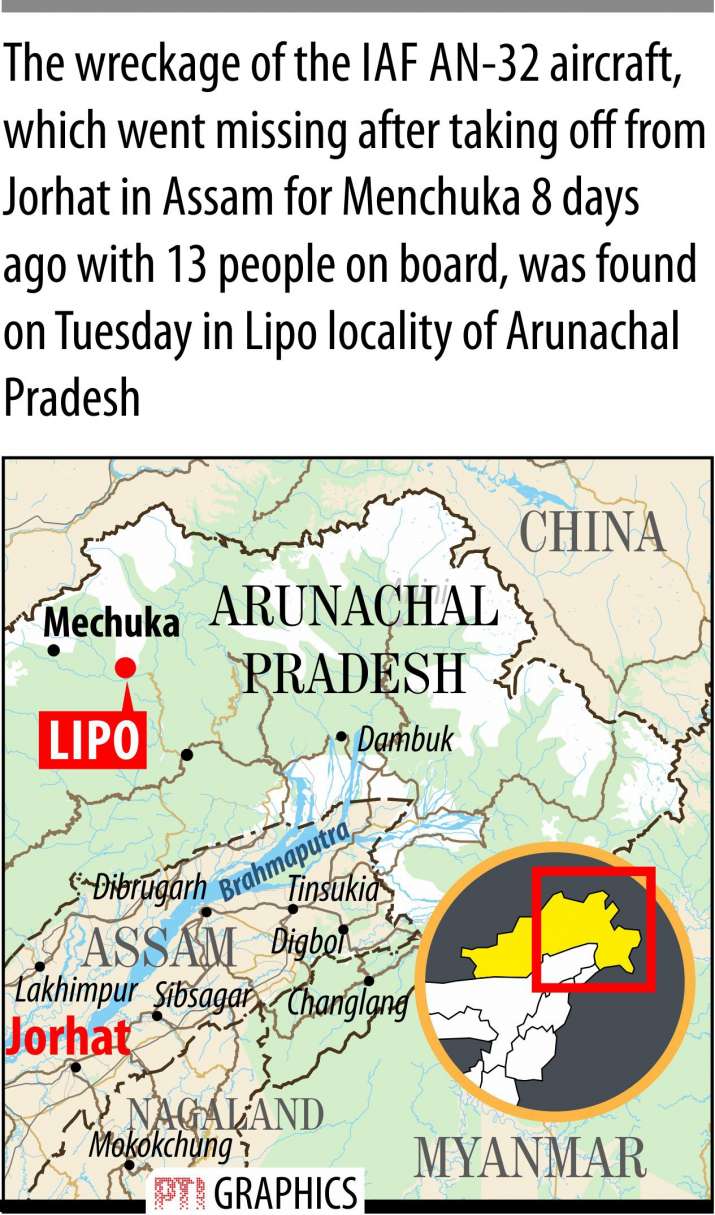 From Jaguar to AN-32, IAF lost nearly 10 aircraft this year

The Indian Air Force has lost nearly 10 aircraft this year, the latest being an AN-32.

From Mirage 2000 to MiG-27, many of these aircraft had crashed in the month of February, officials said.

In January, a Jaguar aircraft of the Indian Air Force had crashed in Uttar Pradesh's Kushinagar district, with the pilot ejecting safely, local police had said.

On February 19, a pilot was killed and two others had ejected to safety when two aircraft of IAF's aerobatic team Surya Kiran crashed near the Yelahanka air base in Bengaluru, a day before the opening of the Aero India show.

Earlier in February, a Mirage 2000 aircraft of the IAF had crashed at the HAL airport in Bengaluru killing a pilot on the spot and leaving another critically injured, police had said.

In the same month, a MIG-27 fighter aircraft of IAF had crashed in Eta village in Pokaran tehsil of Rajasthan's Jaisalmer district, a defence official had said.

A MiG-21 Bison of the IAF, piloted by Wing Commander Abhinandan Varthaman was downed during a dogfight between India and Pakistan sides on February 27 after the Balakot airstrike.

Also, on February 27, a Mi-17 helicopter had crashed in Budgam district of Jammu and Kashmir, killing at least one person. The jet had crashed in an open field near Garend Kalaan village in Budgam at 10.05 am, the officials had said.

A MiG-27 aircraft had crashed late March near Jodhpur in Rajasthan but the pilot ejected safely, official sources had said. The jet had taken off from Utarlai airforce base and it experienced engine problems leading to the crash around 11:45 am in Sirohi district about 120 km south of Jodhpur, they said.

Early March, a MiG-21 fighter aircraft of the IAF had crashed in Rajasthan's Bikaner district with the pilot ejecting safely, a defence ministry spokesperson had said.