Karan Johar ventures into digital space, Ekta Kapoor welcomes him to 'wild side'

After producer Ekta Kapoor, filmmaker Karan Johar has ventured into digital space with a division known as Dharmatics. Doesn't that sound super cool? Announcing it on social media, KJo said that the new company will create content for digital channels.

''A new journey begins!!!! DHARMATIC! The Digital content company! @apoorva1972 this is going to be our new baby! Fiction head @somenmishra Non fiction head @aneeshabaig,'' Karan took to Instagram to announce the project. The director also shared a picture of the company's workplace. 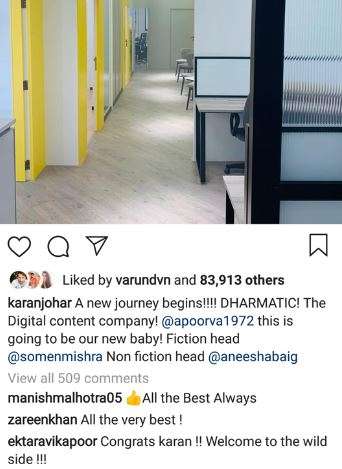 On a related note, Karan is currently presenting Rajinikanth-Akshay Kumar-starrer 2.0, which will release on November 29. He will also direct Takht which is a multi-starrer project with names such as Kareena Kapoor Khan and Ranveer Singh onboard. On the other hand, he is producing Kalank, another ambitious project.

Karan Johar's chat show Koffee With Karan is making a lot of buzz with each passing episode. Recently, we saw Arjun Kapoor and Janhvi Kapoor on the couch, sipping coffee with one of the most popular hosts. The episode not only gave us a sneak peek into their lives but also triggered a controversy. Read in detail.