Munmun Dutta aka Babita Ji clarified that she is not shooting for Taarak Mehta Ka Ooltah Chashmah because the current track does not require her presence.

Taarak Mehta Ka Ooltah Chashmah is one of the most popular shows on the small screen. Every now and then, it manages to gain the attention of fans either because of its storyline or the star cast. Yet again, a similar incident took place when actress Munmun Dutta who is popular for playing the role of Babita Iyer missed the shooting of the show. This had led to rumours that she was asked to quit Taarak Mehta after a controversy over her alleged casteist remark in a video. However, it is not the case.

Earlier, show producer Asit Kumaarr Modi had clarified that Munmun quitting the show was just a rumour and now the actress herself has denied the same. Munmun who has been part of the show for 13 years, said the current track of TMKOChashmah 'did not require my presence.'

Taking to her Instagram Stories, Munmun Dutta wrote "Over the past 2-3 days, few things were falsely reported, which had negative implications on my life. People are saying that I did not report on the sets of the show and it is totally untrue. Reality was, whatever story was written, does not require my presence. Thus I was not called to shoot from the production’s side."

"I do not decide scene or storylines. Production does. I am just an individual who goes to work, does her job and comes back. So if I am not required in the scenes, I obviously do not go to shoot," she added.

Munmun further said, "Also, If and when I plan to quit the show, I will declare it myself because I believe the fans of the showm who are emotionally attached to my character and they deserve to know the truth than just speculations. Thankyou" 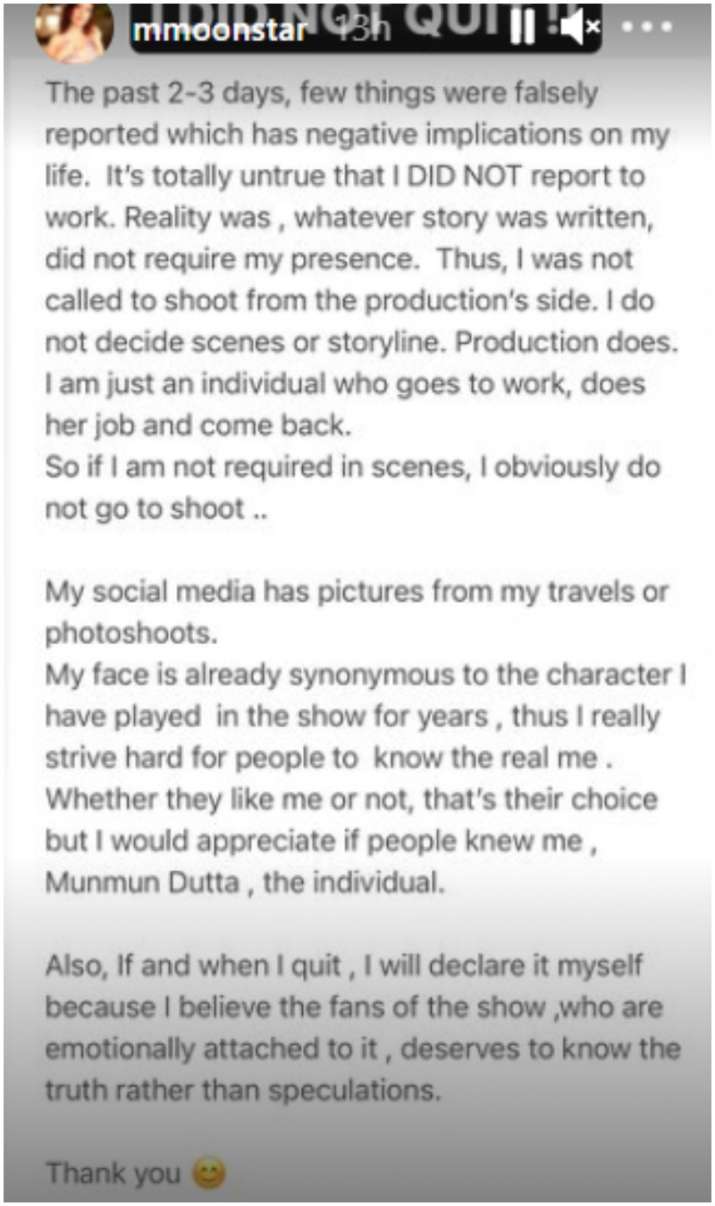 For those unversed, Munmun came into the negative limelight in May this year when a clip from her YouTube channel went viral. In the same, she was seen using the word 'Bhangi' in a derogatory way, and soon she started trending on social media with the hashtag #ArrestMunmunDutta. Following this, she had issued an apology on May 10, in which she said that she used the word due to her 'language barrier'. Although she deleted the video, multiple FIR's were filed against her in few cities.