Rhea Chakraborty is spreading message of hope with new selfie: 'Rise and shine'

In the photo, Rhea Chakraborty is seen dressed in a black blouse with floral embroidery. She completes her look with hoop earrings and keeps her hair open.

Bollywood actress Rhea Chakraborty, who was under the spotlight last year after the death of her boyfriend, actor Sushant Singh Rajput, shared a selfie on Tuesday morning spreading a message of hope. In the image, the actress is seen dressed in a black blouse with floral embroidery. She completes her look with hoop earrings and keeps her hair open. 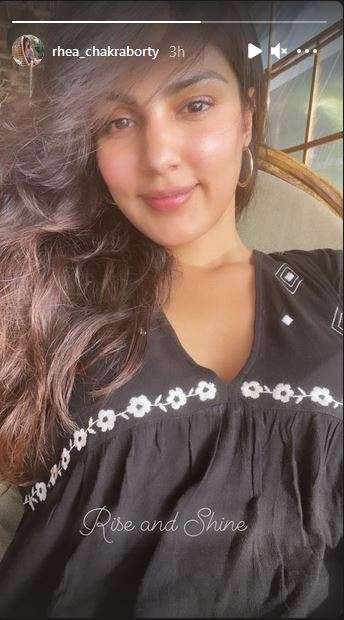 Rhea made headlines after she was accused by Sushant's family for abetment to suicide and also siphoning off funds from the late actor. She was also named in a Narcotics Control Bureau (NCB) chargesheet along with her brother Showik in a drug-related probe into Sushant's death case. She was arrested last year and spent a month in Mumbai's Byculla jail in September.

On the occasion of boyfriend Sushant Singh Rajput's first death anniversary, Rhea posted a note in remembrance of the late actor.

"There isn't a moment where I believe that you aren't here anymore. They said that time heals everything but you were my time and my everything. I know that you are my guardian angel now-watching me with your telescope from the moon and protecting me," Rhea wrote on Instagram.

"There is no life without you, you took the meaning of it with you. This void cannot be filled. Without you, I'm standing still.. My sweet sunshine boy, I promise to give you 'Malpua' everyday and read all the quantum physics books in this world- please come back to me. I miss you my best friend, my man, my love.. Bebu and putput forever #mywholeheart," the actress concluded.

Talking about her work, the actress is part of the film "Chehre" starring actors Amitabh Bachchan and Emraan Hashmi. This is her first film after Sushant's death.