Meghan Markle and Prince Harry paid a heartfelt tribute to Prince Philip, husband of Britain's Queen Elizabeth II, who passed away on Friday at the age of 99.

Meghan Markle and Prince Harry paid a heartfelt tribute to Prince Philip, husband of Britain's Queen Elizabeth II, who passed away on Friday at the age of 99. He was Duke of Edinburgh and Britain's longest-serving royal consort. On behalf of the monarch, the palace announced the news of his death which left the people in Britain in despair. Meghan and Harry took to their website Archewell to condole his death.

Prince Harry and Meghan Markle's message read, "In loving memory of His Royal Highness The Duke of Edinburgh, 1921-2021. Thank you for your service... you will be greatly missed." 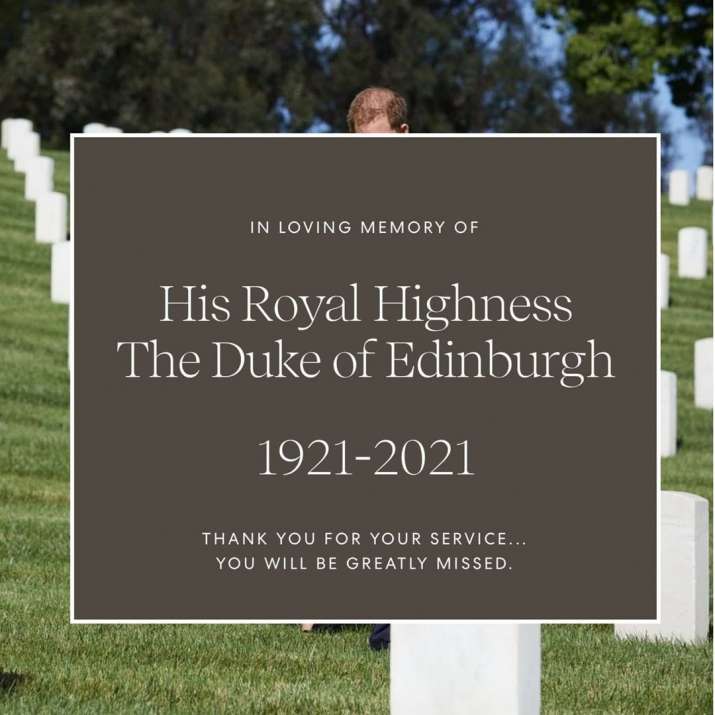 In a statement, the palace said that Prince Philip died peacefully at Windsor Castle on Friday morning. "It is with deep sorrow that Her Majesty The Queen has announced the death of her beloved husband, His Royal Highness Prince Philip, Duke of Edinburgh. His Royal Highness passed away peacefully this morning at Windsor Castle. The Royal Family joins with people around the world in mourning his loss. Further announcements will be made in due course," the palace statement read.

Prince Philip was to mark his 100th birthday on June 10.

The Duke married Princess Elizabeth in 1947, five years before she became the Queen. They were married for 73 years. He had retired from official royal duties in 2017 after years of service in the armed forces and then as a consort to the monarch.

Indian Prime Minister Narendra Modi had also condoled his death saying, "My thoughts are with the British people and the Royal Family on the passing away of HRH The Prince Philip, Duke of Edinburgh. He had a distinguished career in the military and was at the forefront of many community service initiatives. May his soul rest in peace."