Arjun Kapoor (36) and Malaika Arora (48) are often trolled for their age difference on social media. Recently, the reports of Arjun and Malaika's rumoured breakup went viral. Actor rubbished the reports by posting a mirror selfie of the couple.

Bollywood power couple Malaika Arora and Arjun Kapoor took to Instagram on Friday (January 14) and shared an inspiring note on their respective social media handles. The couple who recently made headlines due to their rumoured break-up shared a note about normalizing falling in love in the 40s. The note shared by the duo on their Instagram Stories read,  "No but seriously. Normalize finding love in your ‘40s. Normalize discovering and chasing new dreams in your 30’s. Normalize finding yourself and your purpose in your 50’s. Life doesn’t end at 25. Let’s stop acting like it does (sic)." 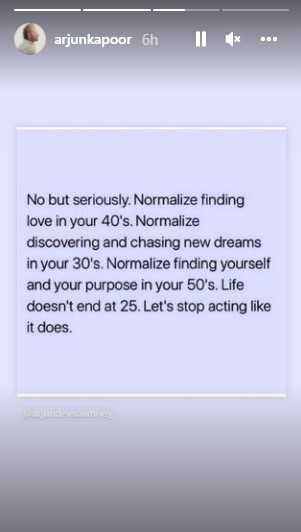 Malaika commented on the picture and dropped a heart emoji in the comments section. Amrita Arora, Sophie Choudry, Athiya Shetty, Tahira Kashyap and Amy Jackson were among others who reacted to Arjun's post.

On the work front, the makers of Arjun Kapoor's upcoming film 'The Lady Killer' announced that Bhumi Pednekar has come on board as the leading lady. The film, directed by Ajay Bahl ('B.A. Pass', 2012) and produced by Bhushan Kumar of T-Series and Shaailesh R. Singh, narrates the story of a small town playboy, who falls in love with a self-destructive beauty.

Apart from this, Arjun will be next seen in Mohit Suri's 'Ek Villain 2' and the yet-untitled Jagan Shakti directorial co-starring John Abraham.