Emergency: Kangana Ranaut to helm Indira Gandhi's biopic, says 'No one can direct it better than me'

Kangana Ranaut is all set to go behind the camera as a director for her upcoming film. After Manikarnika: The Queen of Jhansi, which she co-directed with Krish, the actress will be directing 'Emergency.'

Bollywood actress Kangana Ranaut leaves no stone unturned to justify the characters she portrays on screen. Once again, Kangana is all set to go behind the camera as a director for her upcoming film. After Manikarnika: The Queen of Jhansi, which she co-directed with Krish, the actress will be directing Emergency, based on the life of iconic leader Indira Gandhi. The actress feel that no one can direct the film better than her.

Sharing a news report about the same on her Instagram Story, Kangana wrote, "Pleased to wear Director's hat again, after working on Emergency for more than a year I finally figured no one can direct it better than me, collaborating with fabulous writer Ritest Shah, even if it means sacrificing on various acting assignments I am determined to do it, my excitement is high this is going to be a tremendous journey, my leap to another league #Emergency #Indira." 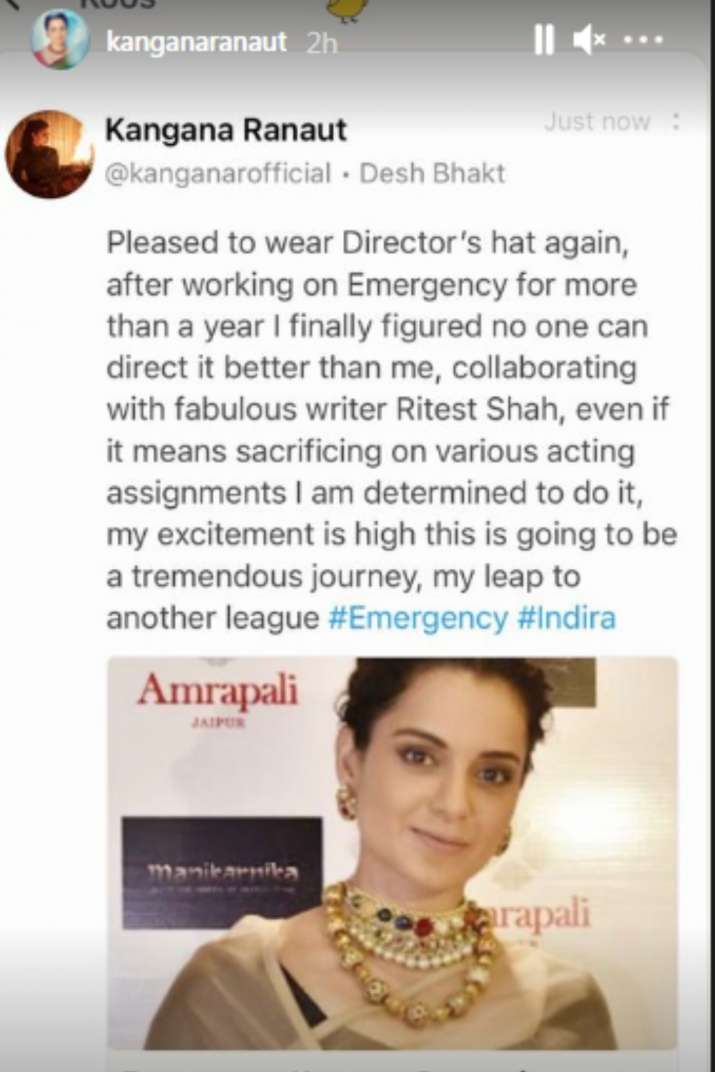 Kangana took to social media on Wednesday to share the news with fans that she is undergoing body scan to play Indira Gandhi. Sharing the pictures she wrote, "Every character is a beautiful beginning of a new journey, today we started journey of #Emergency #Indira with body, face scans and casts to get the look right. Many amazing artists get together to bring one’s vision alive on screen…. This one will be very special @manikarnikafilms."

The film will reportedly feature Emergency and Operation Blue Star. It is being written and directed by Sai Kabir, who helmed Kangana's 2014 release Revolver Rani.

Meanwhile, Kangana awaits the release of her film "Dhaakad". The film is touted as a spy thriller that casts Kangana as Agent Agni. Arjun Rampal plays the antagonist Rudraveer. The Razneesh Razy Ghai directorial is slated to release on October 1.

Also Read: Kangana Ranaut takes body scans for Indira Gandhi's role in Emergency, says 'This one will be very special'