Coronavirus lockdown has made our favourite Bollywood celebrities super active on social media. Similar is the case with Bollywood's livewire Ranveer Singh who keeps on treating his fans by sharing his quarantine routine which includes the activities in which he is indulging in and how his lovely actress wife Deepika Padukone is serving him delicious delicacies. However, his post on June 5 was special as it was for his film Dil Dhadakne Do as it completed 5 years today. A film by Zoya Akhtar worked wonders at the box office and had a multi-starrer cast including stars like Ranveer, Priyanka Chopra, Anil Kapoor, Anushka Sharma, Shefali Shah, Farhan Akhtar, Rahul Bose, Vikrant Massey, and others. As the film turned 5, the actor took to Instagram to share a throwback selfie which was taken in the year 2015 on the sets of the film.

In the photo Ranveer shared, the 'Gully Boy' actor can be seen flaunting his bearded look wearing a white t-shirt acing his killer smile. The photo was captioned, "5 years of #DilDhadakneDo." As soon as he posted, the director commented and wrote, "Take me back (with a heart emoji)."

For the unversed, Ranveer played the role of Kabir Mehra who was the son of Neelam and Kamal Mehra and brother of Ayesha Mehra. Kabir wants to become a pilot but because of his family business, he could not do so. He later fells in love with a dancer on the cruise. Ranveer's co-star in the film Anushka Sharma posted the film's poster on her Instagram story, writing "5 years of 'Dil Dhadakne Do'." Anushka essayed the role of Ranveer's love interest in the movie. 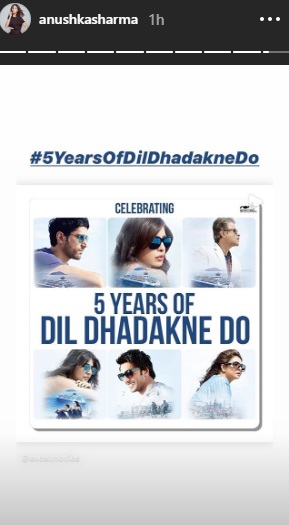 On the work front, Ranveer Singh's upcoming film 83' was slated to release in the month of April but could not due to the ongoing pandemic. He will also be seen in Jayeshbhai Jordaar and Karan Johar's Takht