Aishwarya Rai Bachchan and her daughter Aaradhya attended her cousin's wedding in Bengaluru. The pictures and dance videos of the mother-daughter duo have gone viral on the internet. Have a look

Bollywood actress Aishwarya Rai Bachchan and her daughter Aaradhya attended her cousin's wedding in Bengaluru. The photos and videos from the grand wedding ceremony have gone viral on the internet. The pictures show Aishwarya indulging in various rituals and blessing the bride Shloka Shetty. The actress' daughter Aaradhya can also be seen enjoying the festivities. Aishwarya looks gorgeous in a red ensemble while Aaradhya looks too cute for words in her white and golden traditional outfit.

The pictures also show actress Aishwarya Rai Bachchan and Aaradhya offering prayers to her late father Krishnaraj Rai. On the other hand, the video of Shloka and Karan Shetty's wedding also shows Aishwarya, Aaradhya and Abhishek hitting the dance floor and enjoying themselves with their family. Check out the photos and videos here- 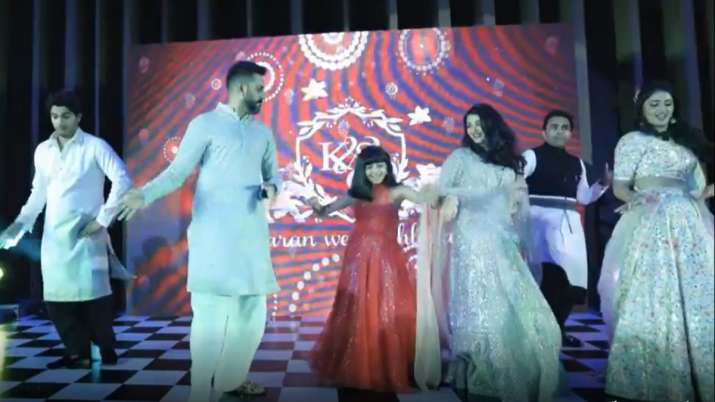 Meanwhile, Aishwarya Rai Bachchan will be seen in Mani Ratnam's upcoming period drama 'Ponniyin Selvan'.  The makers revealed that the big-budget film will release in two parts and the first one will be out in the year 2022. It has an ensemble cast including actors like-- Aishwarya Rai, Vikram, Trisha, Karthi, Jayam Ravi, Lal, Sarath Kumar, Jayaram, Vikram Prabhu, Prabhu, Ashwin Kakumanu, Kishore and Aishwarya Lekshmi among others.

The film is based on writer Kalki Krishnamurthy’s book by the same name. Aishwarya flew to Hyderabad to shoot for the film. Siva Ananth is the film’s Executive Producer while the music has been composed by A.R. Rahman. Ravi Varman is in charge of cinematography.

Aishwarya and Mani Ratnam have worked together in films like Guru, Raavan, Raayanan and Iruvar.