Samsung is one company that caters to all the price segments; the affordable, the mid-rangers, and then the premium ones. With its reach in almost every price category, Samsung had to get into the mid-to-high price bracket, where OnePlus was ruling. That’s when the company decided to produce flagship mid-rangers and produced to us the Galaxy Note 10 Lite and the Galaxy S10 Lite.

The Samsung Galaxy S10 Lite is a part of the Galaxy S10 series that launched last year but with a combination of premium specs and some compromises. To clear the air the Galaxy S10e ain’t the lit-er member of the family, although that’s what we thought.

Nonetheless, we finally have a laddered-down variant in the series -- the Galaxy S10 Lite -- and on papers, this is one smartphone I would love to go for. However, is it really a tough contender in the price range for OnePlus to feel nervous about? Read on my Galaxy S10 Lite review to know:

The Samsung Galaxy S10 Lite is a smartphone that brings forward the huge size of a Galaxy Note smartphone and isn’t cut out from the same cloth as the other Galaxy S10 smartphones. As opposed to the rectangular camera setup in elder siblings, this one has a soft square camera module at the back, comprising three snappers and an LED flash) along with the ‘Samsung’ branding situated at the bottom. 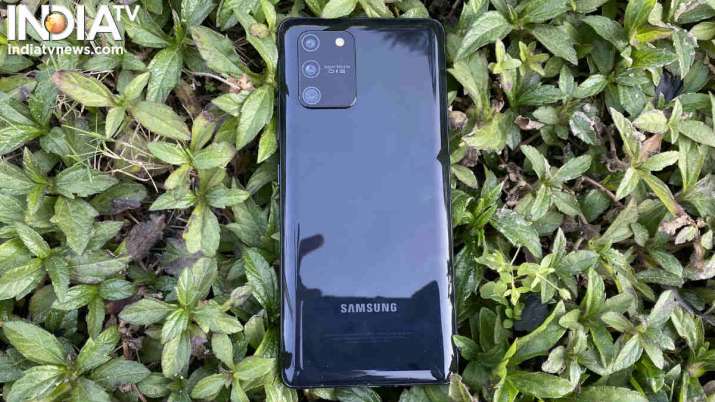 Much like the Galaxy Note 10 series, the Galaxy S10 Lite also has an Infinity-0 display with the notch right in the top middle part of the display. The notch houses the front camera. The display is a bezel-less one and features quite thin bezels. The design department has both shares of good and bad. It’s good to have a distinctive design from the existing S10 devices as it makes room for freshness and I did feel some. What’s not good is that the device totally looks like the Galaxy A51 and the A71, and this very similarity appears questionable to me. 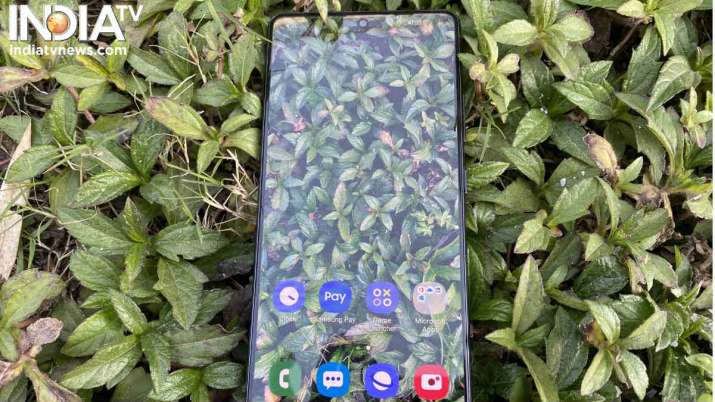 The smartphone is huge in size and quite lightweight. It comes in three colour options: Prism Blue, Prism Black, and Prism White, out of which I got the black version. The black-hued S10 Lite wins the race in the classic versions of a smartphone but the white won my heart. While one-hand usage was a problem for me (a person who loves the size of the Galaxy S10e way more than a huge display), the video viewing overlapped that. I will talk about this in the display section. 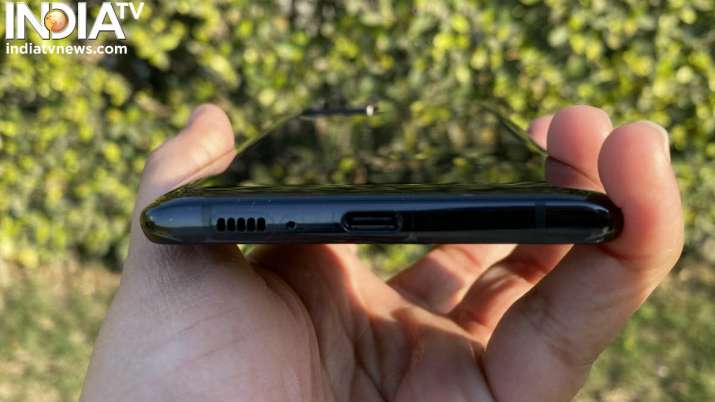 Build quality is decent; it is an amalgamation of both polycarbonate and glass, which Samsung cutely calls Glasstic. This is one of the compromises Samsung made but it doesn't feel like it. While the device remained insured from scratches, dust particles residing on it more often than not was a problem for me. Aesthetics-wise, the S10 Lite has USB Type-C port and speaker grille at the bottom end and the top end is left bare. The left side has a SIM tray, while the right side has a volume rocker and a power on/off button.

The Galaxy S10 Lite doesn’t appear cheap in the hands and serves good looks to our plates. However, the huge size proves to be an obstacle in convenient usage.

The Galaxy S10 Lite spans 6.7-inch and has a Full HD+ (2,400 x 1,080 pixels) screen resolution. The display, which the company refers to as an Infinity-O display is based on Super AMOLED display panel. It is an edge-to-edge display that ensures minimal bezels with a single dotted notch at the top part, which is mostly negligible. 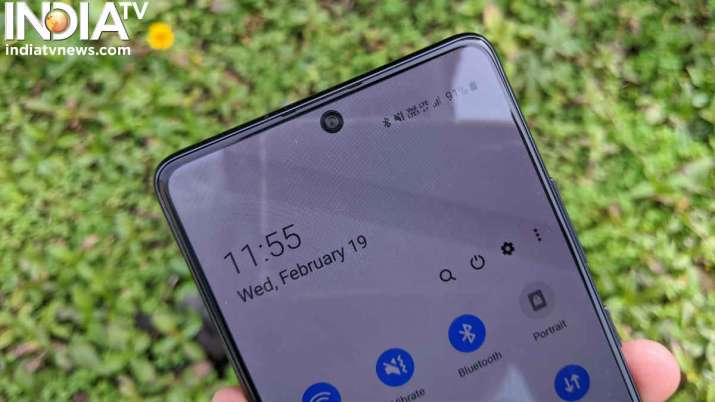 Before I dive into how amazing my experience in this area has been, you should know that the S10 Lite comes stacked with various display features such as Adaptive brightness, Blue light filter, Vivid/Natural Screen modes, Accidental touch protection, Touch sensitivity, and the Edge Screen that pops up a navigation bar to access the most-used apps with ease. 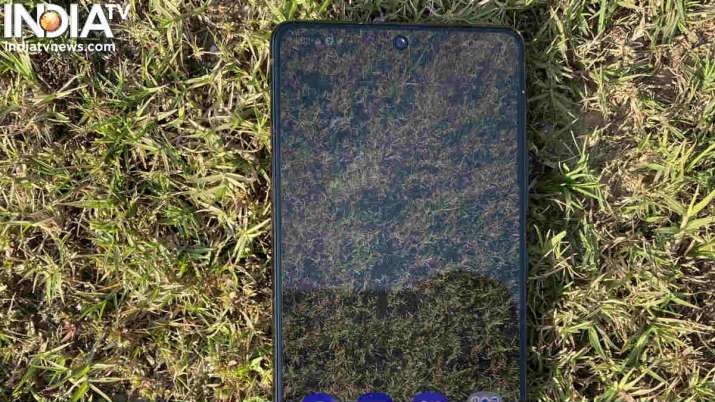 The colours are vividly pleasing, app icons pop up well on the screen as you scroll through it, and the one thing I love doing on my phone, that is, watching videos was enchanting. From watching YouTube videos to binge-watching on either Netflix or Amazon Prime, I loved my S10 Lite companion. The details were aptly enhanced and the big screen proved to be advantageous for the purpose.

However, as mentioned previously, one-hand usability or the times when I needed to use the device while lazing around in bed was difficult; the device face palmed me several times. Among others, sunlight visibility was a breeze.

This section is the main highlight of the Galaxy S10 Lite and I was more than eager to use the cameras. But first, the camera configuration. The Galaxy S10 Lite has a triple-camera setup at the back (a 48MP main lens, a 12MP Ultra-Wide-Angle lens, a 5MP macro lens). The one at the front stands at 32MP. The smartphone has various attractive camera features; Live Focus for bokeh effects, Super Steady OIS for the gimbal-esque stability you need in videos and photos, Live Focus video to blur the insignificant elements, Zoom-in Mic to highlight the required audio, built-in video editing tool, among others. 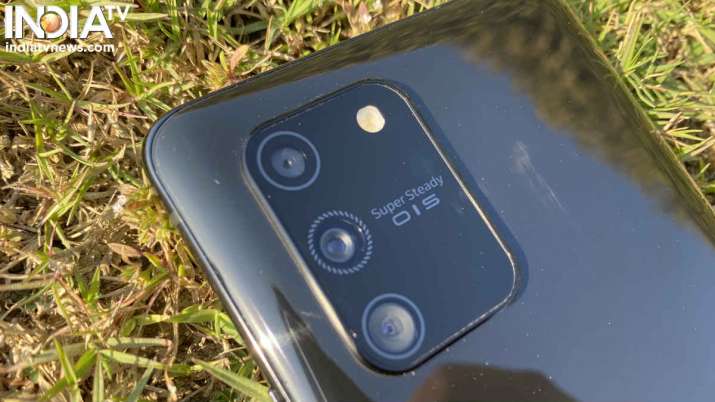 I have mostly been a fan of the iPhone and even the Google Pixel cameras, but this time Samsung surprised me. The rear cameras were able to capture intricate details of the subject well and the bright display made the camera results well-lit. I liked the Ultra-Wide lens in the Galaxy S10+, and the Lit-er variant keeps up the good work it inherited from its elder sibling. Unlike the OnePlus 7T, the ultra-wide lens doesn’t result in colour shifting when switched between the normal mode and the Ultra-wide mode. However, I did face issues with over-processed and over-exposed pictures and it felt like the beauty mode stuck to my camera like the gum sticking to my shoe. This aspect of the camera I didn’t like.

The macro lens amazed me to bits. The kind of details it can capture was more than I expected. It does take some time to settle in the focus on the subject but when it does, you get to see the tiniest detail of the object and that’s what we want from macro cameras. Among others, the Live Focus feature worked fine too and HDR captured bright images and highlighted the dark areas well. The Night mode was good enough but this department is currently ruled by Google and now Apple. Hence, Samsung needs some improvement here. The front camera performed quite decently too; there were details and we know it is 32MP snapper taking those images both in normal and bokeh-ed modes. However, selfies were overly beautified and that was persistent.

As for the videos, the device supports UHD 4K and slow-motion videos. While video recording was equally good, the main thing that passed the test and impressed me was the Super Steady OIS. As advertised, the Galaxy S10 Lite delivered steady videos either on a bumpy ride in the car or in cases when the smartphone ran with me and recorded stable videos. Of course, gimbal ensures utmost stability, but Super Steady OIS implements the traits of a gimbal in a smartphone and it is almost there.

Here are the technical specifications of the Samsung Galaxy S10 Lite:

Since the Galaxy S10 Lite has a high-end processor (although two generations older) and gets its multi-tasking capabilities from 8GB of RAM, the usage ought to be nice and smooth like a feather. Indeed, it was on the smooth road, though there were speed breakers that I encountered at times. However, the performance significantly enhanced when I turned the animations off from the Settings. My primary usage boils down to video streaming, social media, online shopping, and listening to music. The S10 Lite helped me through it quite well and after a long time, I loved the Samsung smartphone with me. While I am not a gaming fanatic, I did play some such as the popular PUBG Mobile and word games. The S10 Lite performed quite well during gameplay, the graphics were decent even on high settings. 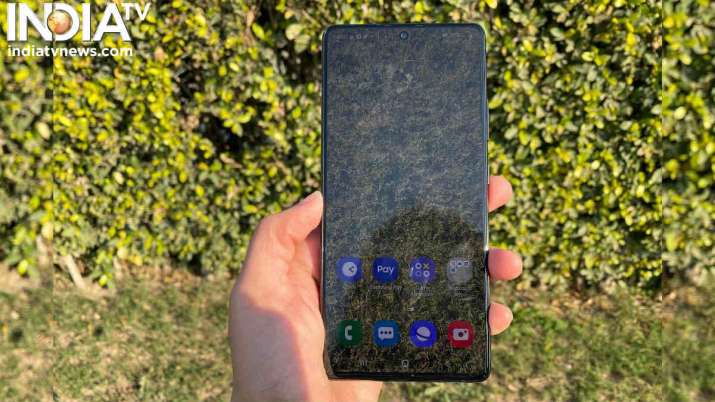 Among the various highlights of the smartphone, there is also an in-display fingerprint scanner, which is a disappointing element. The fingerprint sensor mostly failed to recognise my fingerprint and took a long while to unlock. This, in the case of the OnePlus 7T, was quite decent. Audio quality was really good and my music experience was above average. The in-box USB Type-C-enabled earphones were an added attraction.

The Galaxy S10 Lite sources its fuel from a 4,500mAh battery (with 45W fast charging technology) claimed to last up to 2 days on a single charge. The battery was superb. Apart from the camera features and the display, the battery mesmerised me. It lasted me easily for 2 days on a single charge and ate up its fuel really quick, thanks to the fast charging tech. Sadly, the charger supports only 25W fast charging, which makes the device incapable of showing its full potential in terms of the tech.

The smartphone runs Samsung UI 2.0 based on Android 10 and this section deserves special attention. I refrained from being around the Samsung UI and somehow had a problem with it. With S10 Lite, I thought “Why not give it a chance?” and I am glad I did. The Samsung UI is smooth, clean, and app icons are cute. There is a dedicated app drawer, a dedicated swipe to access Samsung Pay, the Edge Screen navigation bar, Android 10’s dark mode, Focus mode, and no bloatware. Although there are a number of pre-loaded apps, they tend to come handy in some way or the other.

The Samsung Galaxy S10 Lite, with a price of Rs, 39,999 is Samsung’s attempt to stay firmly in the mid-to-high price segment. With impressive cameras, amazing display, and high-end specs, it greatly challenges OnePlus who is a ruler there. However, Samsung needs to work on some aspects such as the in-display fingerprint scanner, more natural camera output, and a possible 90Hz display in a future mid-ranger (since the OnePlus 7T has one).

Having said that, the Galaxy S10 Lite is a superb smartphone in the Samsung world and if a 90Hz display isn’t your area of concern, this one raises Samsung’s stakes quite high, scares OnePlus, and is an option to go for the love of Samsung!