Has Robert Lewandowski been robbed of 2020 Ballon d'Or?

Robert Lewandowski has done everything to win the prestigious Ballon d'Or trophy this season, but in the end, he is robbed by the French Football Magazine who decided to cancel the award ceremony for the first time since 1956.

The 2020 Ballon d'Or was cancelled on Monday amid disruption in football due to coronavirus pandemic across the globe. But is it fair? Not for Robert Lewandowski.

The Bayern Munich talisman enjoyed arguably the best football season of his career. In the Bundesliga winning campaign, Lewandowski netted 34 goals in 31 appearances. He is also the leading goal-scorer in Champions League this season with 11 strikes.

The Polish has done everything to win the prestigious Ballon d'Or trophy this season, but in the end, he is robbed by the French Football Magazine who decided to cancel the award ceremony for the first time since 1956.

The Ballon d'Or is the most prestigious individual award in world football despite ending ties with FIFA in 2016. The key reason behind its cancellation, as stated by France Football editor Pascal Ferre, was the modification of the rules of the sport on resumption during the pandemic, hence the award itself was impacted.

“The Ballon d’Or would have been decided over just three games: quarterfinal, semifinal, final,” Ferré said. “There were loads of changes (to football’s rules) which are totally legitimate and which we don’t contest given the worldwide health crisis, but we couldn’t consider this as a typical year. Exceptional circumstances led to an exceptional decision,” he added.

The game rules might get modified but apart from Ligue 1, all other top leagues completed their football season. Even UEFA Champions League will resume its campaign in August. So it's quite clear that every player got equal opportunity to put up a show to prove their contendership for Ballon d'Or.

However, two major international tournaments got postponed this year: Euro Cup and Copa America, but it's not every year we saw these mega tournaments took place but the Ballon d'Or was given at that time.

Ferre himself claimed that Lewandowski's performance this year was no less than of Messi and Ronaldo.

“Look at Lewandowski’s performances this year, his form has been at the level of Messi and Ronaldo,” Ferré said.

Statistically, the Bayern Munich striker is way ahead of both Messi and Ronaldo this season. He netted 51 goals and provide 6 assists in 43 matches this season. While last year's Ballon d'Or winner Messi scored 30 times and assisted 26 in 42 appearances in the campaign till now. Meanwhile, Ronaldo has 32 goals and 7 assists in his kitty in 41 games. 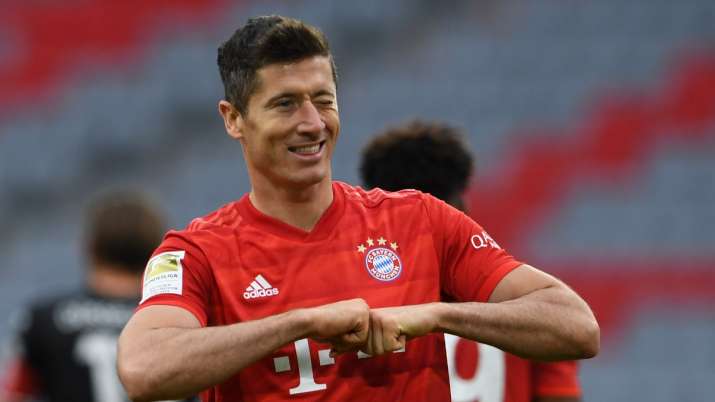 Looking at contribution Lewandowski has been involved in 57 goals, Messi in 56 and Ronaldo in 39, which makes the Bayern Munich star a top contender to win every individual award this season.

Lewandowski has already guided Bayern Munich to Bundesliga title and German Cup and they are currently the firm favourites to lift the Champions League trophy.

- Trophies left for Lewandowski to grab -

Lewandowski is all set to grab the European golden shoe this season with 34 goals in Bundesliga. FIFA Best Player is also one of the major individual awards which the governing body started after ending ties with Ballon d'Or. And Lewandowski is still the prime contender to get it. The UEFA Player of the season is another major glory which the Polish want to achieve but scoring the most amount of goals in the tournament might not be enough for it. He needs to lead his team to the UEFA Champions League to set eyes on the glorious trophy which was won by Liverpool's Virgil van Dijk last season.