At the start of 2019, India had won their first ODI series in Australia, coming down from 0-1 down in a three-game series. They extended their supremacy with a 4-1 ODI series win in New Zealand in February, a victory that made them certainty for lifting the World Cup in England later that summer. And well they assured world cricket after finishing top of the league table in the tournament. Up until then, from the last Champions Trophy at the same nation, India were the best ODI side. 18 months later, India cap off one of their forgettable calendar years with just three wins. Just 2020 things, eh?

Yes, the sample size was small with India having played only nine games in 2020 as most series had got cancelled due to the pandemic. The last time India played less than nine matches in a calendar year was back in 1980, also the year they last managed a few wins as three in a year. The win-loss record of 0.50 is the worst in this century and the lowest since 1997 (0.434).

The primary reason behind India's downfall in the format has been their below-par bowling. The bowlers have combined to average 54.03 in 2020, conceding 300-plus totals in five of their nine games of which India managed just one win. The average, economy rate of 6.38, and strike rate of 50.07 is the worst for any team this year.

2020 has also been India's worst ODI bowling calendar year this century along with the percentage of 300-plus totals conceded by the side. In the graph seen below, where the bowling average and strike rate are compared year-wise for this century, the corresponding numbers place 2020 in the extreme top-right corner. 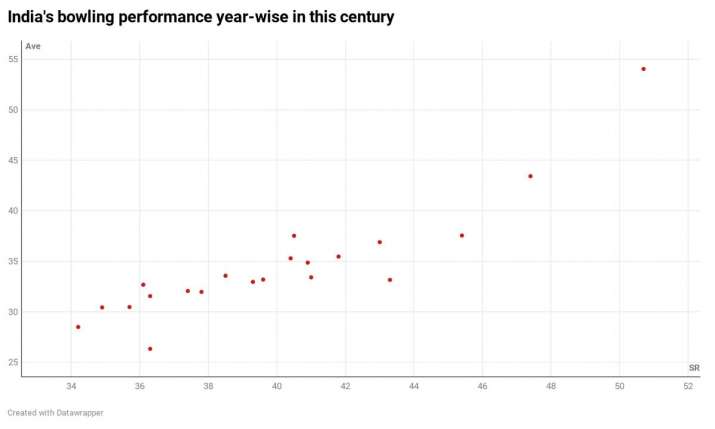 In 2020 itself, the Indian team has managed only four wickets in the first 10 overs of an ODI game in nine matches conceding 527 runs. The average of 131.75 is the worst for any ODI team in a single calendar year, surpassing Kenya's figure of 104.37 back in 2001. According to CricViz, a deeper look into the issue reveals that India, since the start of 2016, have take a wicket every 51.9 balls in the Powerplay which is the worst strike rate for any ODI side during the period.

The presence of an out-and-out swing bowler has hurt India immensely with the new ball amid Jasprit Bumrah's diminishing numbers in the powerplay. At one point, under Virat Kohli's captaincy, India had thrived in the first powerplay riding on the combination of Bhuvneshwar Kumar and Bumrah, the duo who were hailed as formidable bowlers both with the old and the new ball. But Kumar's struggle with pace and fitness saw him manage only 19 appearances in India's last 37 ODI matches, all of which came last year. Kumar managed 10 wickets in the first ten overs of those 19 games and Bumrah picked seven wickets in the 14 games he played in 2019. Deepak Chahar is the only likely possibility that India can look forward to in their build up to 2023 World Cup.

Another factor has been the splitting of the famed Kul-Cha pair. Together they haved played 34 ODI games since 2017, taking 118 wickets between themselves. India lost nine of those 33 matches while one ended in a draw.

Kuldeep has missed more games since the last World Cup in England with India replacing him with Ravindra Jadeja who has by far proven to be more of a batsman than a bowler. His ability to build innings patiently and strike the ball hard during the slog overs has helped India immensely lower down the order, but has failed to be as effective with the bowl, the reason why he had lost his spot after India's Champions Trophy defeat in 2017.