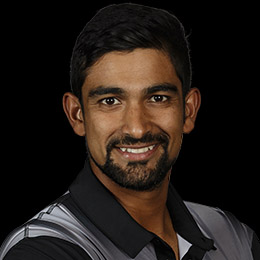 A spinner with plenty of potential to shine and has the caliber to collect wickets, Ish Sodhi has had a mixed career as New Zealand on home turf do not need spinners on fast pace tracks. However, on overseas tours, Sodhi is the man to take wickets. After Daniel Vettori, Sodhi has taken the responsibilty to deliver as a spinner. He could not make an impact in Test cricket but suited the limited overs formats. Coming from a family of Indian roots, Sodhi shifted to New Zealand at a tender age and pursued his career as a cricketer. Sodhi is still young and has plenty to learn and slowly and steadily, he's making his way through. He played for Rajasthan Royals in the Indian Premier League in the 11th edition of the T20 league. He has also played in the Big Bash League and the Caribbean Premier League as well. Sodhi wiil aim to impress to cement his name in the World Cup squad.