Opinion | How long should people wait to get basic health facilities?

At a time, when most of the people in cities across India are indoors due to lockdown enforced by state governments, and people practising Covid guidelines strictly, there are fraudsters who are playing with public health, by recycling medical waste and selling them in markets.

Today I would like to focus on two key issues relating to public health. The first one relates to recycling of used hospital gloves, masks and syringes from medical waste, and the second relates to our crumbling rural health infrastructure. These need to be addressed at a time when India has to gear up to face, what is being called the Third Wave of pandemic that is going to swamp us.


Already the Second Wave is on the wane, with daily fresh cases declining to 1.86 lakhs on Thursday and active case load falling to 23.4 lakhs. More than 2.59 lakh Covid patients were discharged on Thursday after full recovery. So, the recovery rate is now at 90.34 per cent, which is a satisfactory trend.

At a time, when most of the people in cities across India are indoors due to lockdown enforced by state governments, and people practising Covid guidelines strictly, there are fraudsters who are playing with public health, by recycling medical waste and selling them in markets. On Thursday, Delhi Police arrested three persons with a huge stock of 850 kg gloves, that were used in hospitals, thrown as medical waste, picked up, cleaned, recycled and packed for resale in West Delhi. This stock was seized from two flats in Dabri and Bindapur. The police raid was conducted on the basis of information received from an informer.

Gloves, masks, syringes and Covid test kits are key tools to counter the pandemic. The recycled gloves that were seized could have been worn by doctors while performing surgeries, or by Covid patients, or by health care workers while tending to Covid infected people. These gloves were thrown as medical waste, but unscrupulous traders decided to make a killing by recycling them. Clearly they are playing a dangerous game with public health.

A few weeks ago, we showed in ‘Aaj Ki Baat’, how cotton strings used in Covid test kits were being prepared unhygienically by women and children in a slum area in Ulhasnagar near Mumbai. The local administration conducted raids and seized all the stocks, apart from checking with diagnostic centres who may have bought these kits.

The recycled gloves that were seized by police on Thursday were collected from medical waste sent by Delhi hospitals. The number of such recycled gloves ran into lakhs. Just imagine the risks faced by people who buy and wear these recycled gloves. Stringent action should also be taken against unscrupulous shopkeepers who purchase these gloves from traders and sell them at cheap rates. They must be hauled up by law enforcers and the most stringent laws must be used against them. We cannot allow such traders to spread the deadly virus.

And now to the second topic: our crumbling rural health infrastructure. In ‘Aaj Ki Baat’ on Thursday night, we showed visuals of a hospital campus with leaky roof and falling plaster. During monsoon rains, doctors and nurses sit at their tables with umbrellas over their head, while patients also use umbrellas to protect them from rain water.

This hospital is named Jan Nayak Karpoori Thakur Referral Hospital in Tajpur of Bihar’s Samastipur district. Our reporter Gonika Arora is presently touring Bihar, and she sent us visuals of the decrepit building in which this hospital is working. A ‘referral hospital’ in medical parlance is one where patients are referred to by doctors working in primary health centres and district hospitals. It is supposed to be a multi-speciality hospital. Our reporter noticed plaster peeling off from ceilings held in place by iron beams. The building can collapse any moment, and yet this is an ‘operational’ hospital in the records of the state health department. 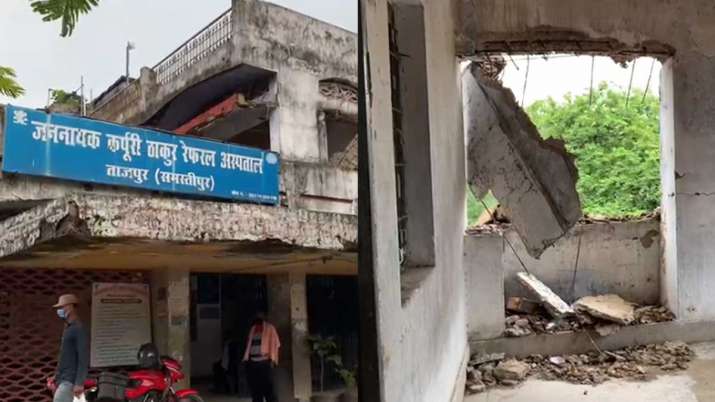 When our reporter spoke to senior health officials about the state of this hospital, they nodded their heads and promised ‘to look into the matter’. These officials, who adorn senior posts in the state health department, are supposed to ensure that the hospital is in proper working condition. They are being paid for this, but they displayed a strangely nonchalant attitude.

This is not a solitary case. There are similar hospitals in Darbhanga, Madhubani and other districts of Bihar. In health centres, where human beings are supposed to be treated, cattle have been tied to the posts. In centres, where doctors should have been working, buffaloes occupy their spaces.

In the Samastipur hospital, doctors are there, but it seems all arrangements have been made for early death of patients, with leaky roof and plasters peeling off from ceilings. There is garbage all around and the poor patients literally live in a state of fear. Doctors, too, are a helpless and harassed lot.

The question is: Will it be proper to name a health facility as a hospital or health centre, where the ceilings are ready to fall and cattle are tied? Do the senior doctors working in the state health department have even a modicum of shame? Chief Minister Nitish Kumar has been ruling the state for the last 15 years, and his government must be made accountable.

Our reporter Gonika Arora while sending the visuals commented that she felt ashamed by calling this a hospital. On the contrary, the top guns working in the state health department should feel shame, those who have been ruling Bihar for the last 15 years should be ashamed.

Just imagine, this is the state of hospitals and health centres in Bihar and the state is supposed to be tackling the Covid pandemic. How can the lives of people be saved? The biggest question is: When will all the citizens of India get basic health facilities? How long should they wait?

India's Number One and the most followed Super Prime Time News Show 'Aaj Ki Baat – Rajat Sharma Ke Saath' was launched just before the 2014 General Elections. Since its inception, the show is redefining India's super-prime time and is numerically far ahead of its contemporaries.