Prime Minister Narendra Modi interacts with fitness influencers and citizens during a nation-wide online Fit India Dialogue which was organized to celebrate the first anniversary of the Fit India Movement on September 24. Catch the highlights here.

Prime Minister Narendra Modi on Thursday interacted with fitness influencers and citizens during a nation-wide online Fit India Dialogue which was organized to celebrate the first anniversary of the Fit India Movement. The online interaction saw participants sharing anecdotes and tips on their own fitness journey while drawing out guidance from the prime minister on his thoughts about fitness and good health. Among those who participated ranged from Virat Kohli to Milind Soman to Rujuta Diwekar in addition to other fitness influencers.

The influencers who shared their thoughts on fitness and health included Kohli, Milind Soman, Paralympian gold medalist Devendra Jhajharia, nutrition expert Rujuta Diwekar, Afshan Ashiq - a woman footballer from Jammu and Kashmir who now trains other girls in football, Swami Shivadhyanam Saraswati - an alumni of IIT and MIT who will be representing the Bihar School of Yoga and Bharatiya Shikshan Mandal's Mukul Kanitkar, who is renowned for his research for National Resurgence and is a educationist, among others.

"In times of Covid-19 pandemic, fitness has become an even more important aspect of life. The dialogue will see a timely and fruitful conversation on nutrition, wellness and various other aspects on fitness." Envisioned by Prime Minister Modi as a people's movement, the Fit India Dialogue is yet another endeavour to involve citizens of the country to draw out a plan to make India a fit nation, the PIB statement said. 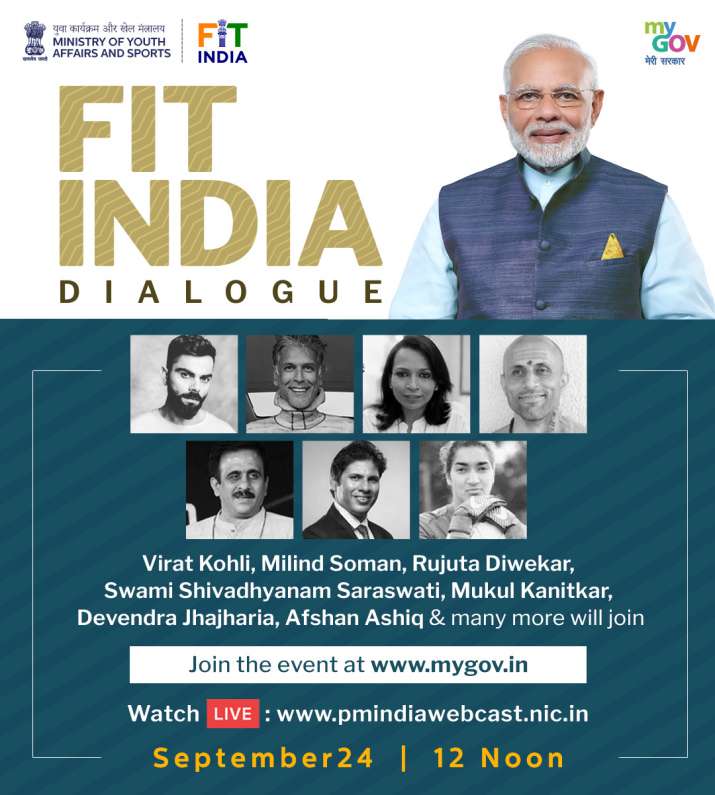 In the last one year since its launch, various events organised under the aegis of the Fit India Movement have seen enthusiastic participation of people from all walks of life and from across the country. Catch the LIVE updates of Fit India Movement 2020 here: