During an Instagram session, while some users wanted to know if wife Dipika Kakar's fame makes Shoaib Ibrahim jealous, another user asked for his permission to flirt with the actress. The actor answered all fan queries with grace and wit.

Actor Shoaib Ibrahim interacted with fans by hosting an 'Ask Me Anything' session on Instagram and he was bombarded with several questions related to his actress wife Dipika Kakar. While some wanted to know if his wife's fame makes him jealous, another user asked for his permission to flirt with the actress. The actor answered all fan queries with grace and wit.

A user also trolled Dipika. He asked, "Why dipika shouts so much?? .. Isnt that irritating?" MAinting his calm, Shoaib responded, "Irritating shayd aapke liye hoga but not for me, not for my family and not for the people who know what we are. It's ok sabki apni apni pasand hai. Mere liye, meri family ke liye aur unke liye jo use chahte hai unke liye anmol hai wo. Baaki ke log kya sochte. I don't even care." 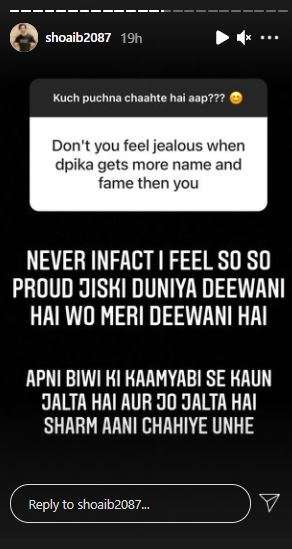 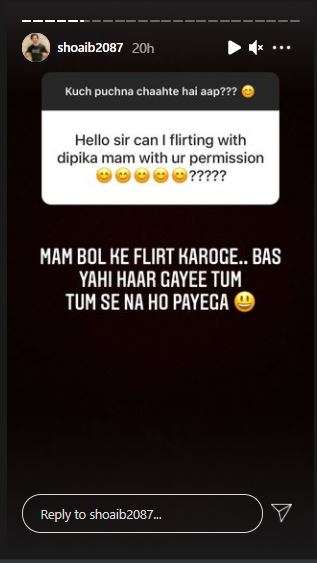 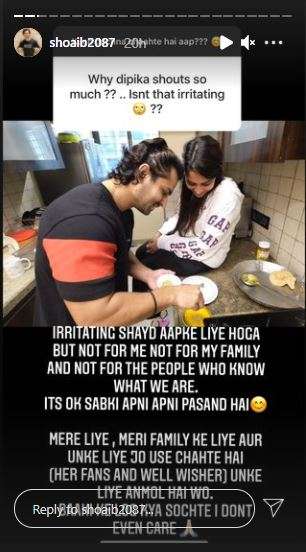 Shoaib and Dipika are known for their roles in Sasural Simar Ka. While Dipika was seen in the titular character, the actor played the role of Prem Bhardwaj. The two tied the knot in 2018. In 2019.

On the work front, Shoaib made his Bollywood debut with the movie "Battalion 609". He was last seen in the TV serial "Ishq Mein Marjawan". Dipika, on the other hand, began shooting for Sasural Simar Ka season two earlier this year.

The story is based in Agra and the new episodes are being shot the across iconic places of the city including Taj Mahal, Sadar Bazaar, Bijli Ghar and Tajganj.