Shilpa Shetty and Raj Kundra got married on November 22, 2009. The couple will soon complete a decade of togetherness this year. The businessman posted a love-filled post for his wife on Instagram.

Shilpa Shetty and Raj Kundra’s jodi is the epitome of true love. The couple got married on November 22, 2009, after which began their happily ever after. They will soon complete a decade of togetherness this year. In spite of being busy in their work, the couple takes out time for each other to go out on vacation or to post lovable message on social media to make each other feel special. Yet another the businessman took to his social media to share a love-filled post for the actress.

Raj shared a picture from their romantic getaway in Spain and captioned it as, "My love for you is a journey starting at forever and ending at never...and if a hug represented how much I loved you, I would hold you in my arms forever! #love #girlfriend #dream #queen #life #happiness #spain #wellness #angel."

Replying to this, Shilpa commented, “Awwwwwwwwwwwww @rajkundra9 love is an understatement for what I feel for you #boyfriendforlife.” 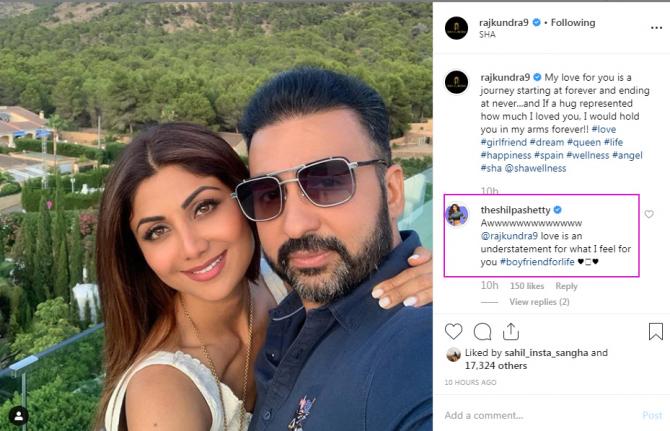 Shilpa, in an Instagram post on Proposal Day this year revealed how her man popped the question. She wrote, "...still remember you booking out the whole banqueting hall at Le Grand Hotel Paris...telling me it was just early supper at a friend's, and you surprised me with a ring under the cloche and went on one knee with live musicians playing Lady In Red when I entered. The setting, Paris...ufff! That proposal was straight out of my (every girl's) dream."

Shilpa on Friday took to Instagram to share a video that shows her taking swimming lessons. "Today was an incredible feeling. An honest confession: 'I can't swim'. I have tried so many times to learn, trust me, but in vain. So I'm not a water-baby. But today I felt like a child in a mother's womb. (I) Had to share this with you. The smile on my face is proof of the bliss I felt to just be able to float," she captioned the image.