After a long seesaw battle, the Congress has emerged as the single largest party in Madhya Pradesh, however, it will need support of at least two other MLAs to form government in the state after almost 15 years. The counting for Assembly elections, which began at 8 am on Tuesday, continued through the night and the final results were declared on Wednesday morning.

The results for all 230 seats have been declared and the Congress has won 114 seats and the ruling Bharatiya Janata Party (BJP) 109 seats. The Mayawati-led Bahujan Samaj Party (BSP) has two seats. The Samajwadi Party (SP) has won one seat and Independent candidates have won four. 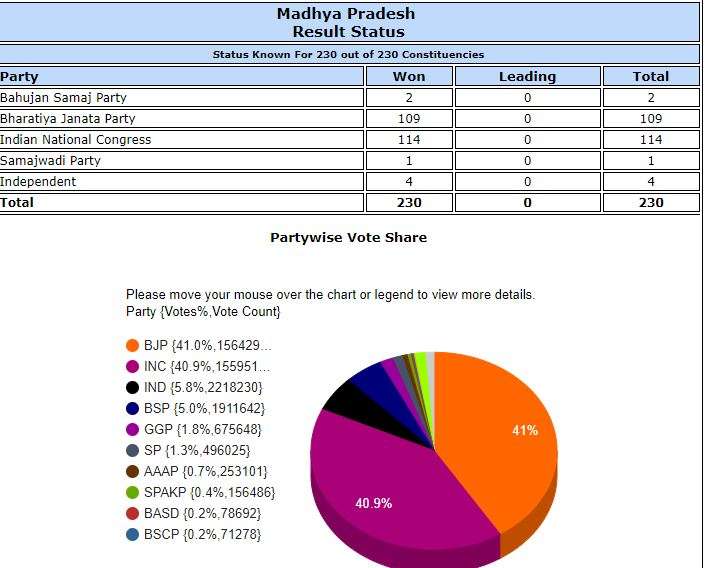 Meanwhile, in a hurriedly organised press conference at 2.30 am on Wednesday, Congress leaders Kamal Nath, Jyotiraditya Scindia and Digvijaya Singh appeared before the media and said that they have written to Governor Anandiben Patel to invite them to form the government.

"With utmost happiness, I wish to inform you that Congress has won clear majority. We have written a letter to the Governor to invite us so that we can prove our majority before him," Kamal Nath told reporters in the press conference in Bhopal that barely lasted a minute.

Now, all eyes on Governor Anandiben Patel as she would play a decisive role in the government formation in Madhya Pradesh.