Rohit Sharma's rise through the ranks in Test cricket

The difference in Rohit's home and away average of 54.05 is the most by a batsman ever (min. 20 innings) but since opening the innings for India, the figure reads 24.23 which only shows that he has been growing into the role.

24.23Often, individual achievements tend to get overshadowed, when the team collectively strives for redefining dominance. Or maybe, when the individual is unable to break away from the shackles of old perceptions held by people around. For Rohit Sharma, it has been both.

More than seven years back, Rohit had made his Test debut, in style scoring 177 and 111* in consecutive innings in the series famously remembered for Sachin Tendulkar's final appearance. But the virtue of his twin knocks, Rohit was further recalled in subsequent Test series for India, but only proved to be a pale shadow of the immense promise that he had shown in his debut appearance which was largely showcased by the vast difference in his home and away average. In the 27 Tests that he played until December 2018, 18 were away from home where he averaged just 26.32, the worst for any top-order (1-7) Indian batsman during the period who at least played 10 such Tests. Rohit's tally of 816 runs in 33 away innings was laced with just five half-centuries and three ducks. In the remaining nine Tests that he played, all at home, Rohit averaged 85.44, the most by any top-order (1-7) Indian batsman during the period who at least made five appearances at home. Rohit scored 769 runs in 14 innings laced with three centuries and five fifties and just one duck.

Parallelly, Rohit had grown in stature as a white-ball maverick, scoring double centuries in ODIs and winning titles in the shortest format. A perception was eventually built wherein Rohit was seen as more of a white-ball cricketer which overshadowed his red-ball struggle, where he tended to be more comfortable on home soil.

The perception prevailed even as Rohit shone under the new responsibility presented to him to revive his Test career. Late in 2019, amid India's opening conundrum, Rohit was tried as a Test opener and he returned with splendid figures. Albeit all on home soil, Rohit scored 852 runs in 12 innings at 77.45 with four centuries, two of which were 150-plus and one was a double century. 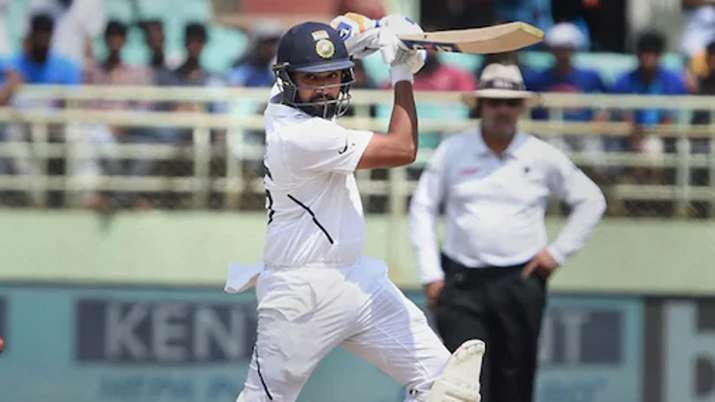 Rohit's ability as a Test opener was recognised and hailed, but veterans were more eager to evaluate him after his overseas performance. He missed the New Zealand tour last, in February 2020, owing to a shoulder injury, and was again in doubt for the Australia tour last December before he was declared fit for the third and fourth Test. Sometimes numbers do not paint the entire picture and Rohit's average of 32.45 in those two games which included a half-century, is a perfect example. Rohit looked well in control against Australia's pace-ball attack, and averaged 58 against the new ball while being dismissed only once between overs 1 and 15 and his assertive take on Nathan Lyon was exemplary.

It is rare for a batsman to be both aggressive and be in control, and Rohit showed that rare quality in his four innings in Australia. And it came handy for India on a turning Chennai track against England a fortnight back. First innings runs on these tracks become important, as it was seen in the series opener, and Virat Kohli, after managing to win the toss, needed his opening pair to act upon accordingly. Patience is a virtue, but not always on such tracks where run rate to comes into the picture amid possibilities of collapses. India lost Shubman Gill early, but Rohit simply looked perfect on that rank turner and made batting look like a walk in the park en route to his 161 off 231. The only difference between his Australia and Chennai knock was one single stroke that he dished out more often than he had against Lyon. He used the sweep 16 times against the spinners in Chennai as against four in Australia but did step out as often as he did against Lyon and used his footwork well.

Rohit's improved performance has taken his home average to 81.05, the most by a player in India (min. 20 innings) and third-most by a player, after Don Bradman's 102.84 in England and 98.22 in Australia, in a single country (min. 20 innings). And he has been rewarded with a career-best ICC Test ranking of eight, his second-entry to the top 10, both during his time as an opener.

As for the perception, the increased career home average has only widened the gap between the two figures (54.05) making it the most ever by a batsman (min. 20 innings each), but since opening the innings for India, Rohit's difference in average is just 24.23 which only shows that he has been growing into the role. The England tour in September will certainly be his biggest test, but Rohit's vast improvement in such little time also indicates that the batsman will gear himself up, with little tweaks in his techniques, just in time for the contest.