On this day: Shane Watson batted with bloodied knee but was unable to stop Mumbai Indians to 4th IPL trophy

Unfortunately due to coronavirus outbreak the 13th edition of Indian Premier has been indefinitely postponed, which makes the MI vs CSK IPL 2019 final the last IPL match to be played.

Unfortunately due to coronavirus outbreak the 13th edition of Indian Premier has been indefinitely postponed, which makes the MI vs CSK IPL 2019 final the last IPL match to be played to this day.

The Rajiv Gandhi International Stadium was full packed for the epic finale as the match lived up to its hype with a last-ball thriller. The rivalry between the two franchise is considered as the most intense one, because of their successful track record. CSK won the 2018 IPL on their return to tournament after two-year ban and fans wanted them to replicate the success in 2019.

Mumbai Indians had a slight edge over Chennai as they beat them thrice in the season before final, (twice in the league stage and then in Qualifier). While CSK beat Delhi Capitals in the eliminator to book the seat for the finale.

The stage was set for the battle of supremacy as both the teams had three IPL trophies each in their kitty before the final. Rohit Sharma and MS Dhoni, both were calm and composed during the toss with a smile on their faces at the center of a jam-packed stadium.

Rohit won the toss and opted to bat on the bowling friendly wicket, to give his bowlers an upper hand in defending a total. MS Dhoni's army was ready to raid the Mumbai's batting order and they did it by dismissing the two solid openers Quinton de Kock and Rohit Sharma for 29 and 15 inside the powerplay overs.

Suryakumar Yadav tried to put some fight but Imran Tahir trapped him followed by his epic sprint celebration. Krunal Pandya also failed to come big at the biggest stage with bat and departed on 7. After 89/4 in 12.3 overs, Mumbai Indians veteran Kieron Pollard walked in the middle and changed the course of the game with his explosive batting.

Pollard slammed 41 of 25 balls, which included 3 fours and 3 sixes. Mumbai put a competitive total of 149/8 on the scoreboard after 20 overs.

With a bowling line up which have the likes of Jasprit Bumrah and Lasith Malinga, it was decent total to defend in Hyderabad.

CSK got off to a good start with 70/1 in after 9 overs at the loss of  Faf du Plessis's wicket, but then came another twist in the tale. The solid middle-order of CSK which had Suresh Raina, Ambati Rayudu and MS Dhoni, started collapsing and they were 82/4 in 12.4 overs. 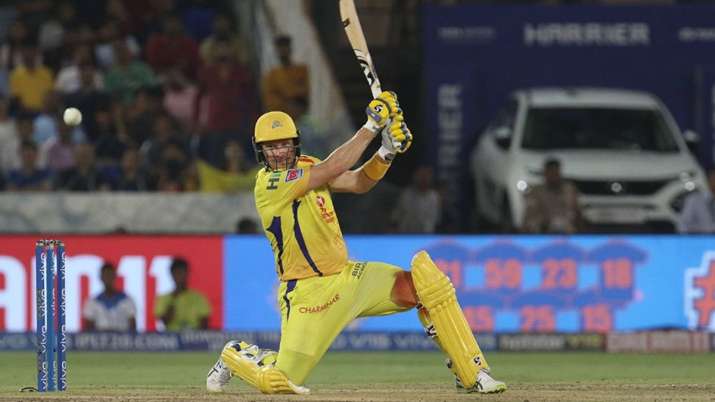 Shane Watson turned his warrior mode on and was fighting for his team with his leg bleeding due to injury. Former Australian player gave his blood and sweat in the finale and slammed 80 runs off 59 balls before getting run out in the last over.

Watson took the match to the last over, where Rohit chose the best in business to win him the trophy, Lasith Malinga. The equation was easy, CSK needed 9 off 6 balls with Watson and Jadeja in the middle. The duo collected four runs in the first three balls, then Malinga decided to bowl his favourite and the best delivery - 'Yorker'. It was a wide yorker so that it couldn't land in Watson's range and the Aussie guided it towards deep point and completed a single. But there came the biggest twist as Jadeja and Watson had a miscommunication and the latter was unsure for the double but he ran and Krunal with a rocket throw got him out.

Shardul Thakur came into bat after Watson's departure, he took a double on the fifth ball and match was stretched to the last ball.

Four runs on the last ball and the trophy is yours, but CSK slipped it as Malinga's yorker left Thakur clueless in front of the wicket and was given LBW out. Mumbai won the match by just a margin of 2 runs.

The crowd went mad, so were Mumbai Indians players and dug out as they became the first team to win four Indian Premier League titles.