India staged a late come back in the third session of day two in Wellington but Jasprit Bumrah's form will be worrying for Virat Kohli.

The Indian bowlers, who have been hailed as world-class by many in recent times, looked completely out of order for most parts on Saturday but they staged a late come back to make amends. New Zealand did take a 51-run lead at the end of day two in Wellington but with little or no help on offer for the bowlers, the Indian bowlers would be content with what they have done.

India managed to take 5 wickets and hurt the hosts towards the end but the grind on a wicket that didn't help much was up there to be seen. While Ishant bowled two beauties to get his wickets and Ashwin set Henry Nicholls up beautifully, the other two resulted in two loose shots which resulted in the downfall of Tom Latham and a set Kane Williamson.

Barring Ishant Sharma's deliveries that got Tom Blundell and Ross Taylor out, the Indian pacers lacked the edge which made them so effective over the last couple of years in Test cricket. Neither of Jasprit Bumrah or Mohammed Shami could consistently trouble the batters regularly and stem the run flow at Basin Reserve and back Ishant, who chipped in with wickets here and there.

But, it is Bumrah's form that will be concerning Kohli and the team management the most.

Bumrah's was the weakest of the trio with him giving runs away at a healthy rate. His return from injury hasn't been great and after a brief spell of brillaince in the practice match against New Zealand XI. In the three-day warm-up game, the Gujarat pacer did get the ball to move around and grab two wickets but once again, his ability to breach defences and consistently trouble the batsmen with his nagging line, length and bounce.

Shami, however, did manage to trouble the batsmen on occasions with his lengths but overall, much like Bumrah, was flat and the Kiwi batters did manage to get runs off him and maintain pressure on the Indians, who didn't manage to put on a big score. However, in the end, Shami did chip in with the all-important wicket of Kane Williamson, who played a loose shot to sell his wicket to the pacer.

But, Ishant did prove once again why he has grown into a leader of the pack in this Indian pace attack. Despite coming back from an injury, his relentless approach and bounce allowed him to get wickets for India. With Tim Southee and Kyle Jamieson bowling peaches in the first innings, Ishant had his own answer for that.

His delivery to Tom Blundell will stand out as one of the best from the match if not best. Pitching on off with a hint of inswing, the ball came back in, got through Blundell's defence to send him packing and break a steady stand that was building between Williamson and the Black Caps opener. 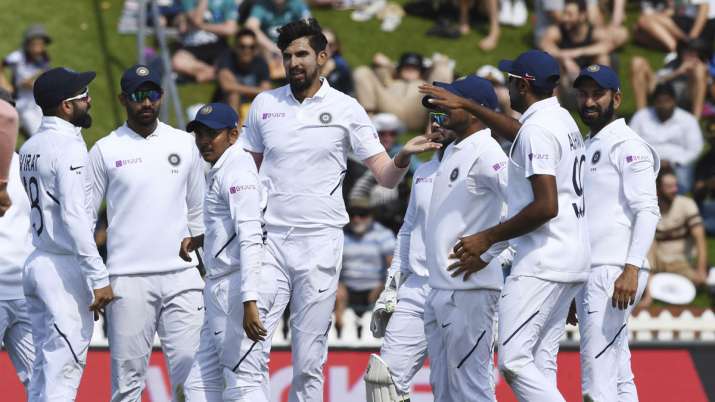 Later, Ishant once again came back and got the wicket of Taylor before he could reach his fifty. Courtesy of his height, Ishant does get the extra bounce and it got the better of Taylor as the ball jumped off a good length and hit his gloves before presenting itself to Cheteshwar Pujara at backward short-leg.

R Ashwin looked the most ineffective of the Indian bowlers until he showed why he remains an important cog in India's wheel. The off-spinner, who is returning to the side ahead of Ravindra Jadeja, didn't look troubling at all for most parts but did keep the run-rate in check. And, at the fag end of the day, he set up Nicholls beautifully to get his wicket. Going round the wicket, he pitched one on good length with a little angle towards the leg and that extracted an edge from the Kiwi's bat and was grabbed by Kohli at first slip.

New Zealand was led by Williamson ably as he saw off all the challenges from the Indian bowlers and took the Black Caps past the paltry score which the Indians put on the board.

Following an early call-off on day one, Indians had the time to reflect on the pitch and do what Williamson did for New Zealand but following the comical run-out of Rishabh Pant, neither Ajinkya Rahane nor R Ashwin could hold fort and score runs from an end.

It is not surprising now as India's batting has always been average in the first Test of a series in the last couple of innings. At times they have been bailed out by individual brilliance but this time neither Virat Kohli nor Cheteshwar Puajra were there to do something about it and in the end, the result was a lowly 165 in the first innings.

But, despite the low scores, what helped India's case was the bowlers doing well and getting wickets but in Wellington, that hasn't been the case and India's overseas struggle have once again come to the forefront. Time remains in the game and a 51-run lead may not look much now but if the bowler's fail to replicate the third session of day two, India will have a long, hard road ahead to save this game and maintain their unbeaten record in the World Test Championship.