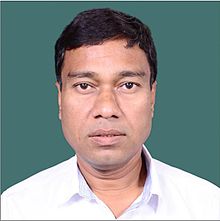 Rameswar Teli is an Indian politician from Assam, and a member of the Bharatiya Janata Party. He has been elected to the Lok Sabha from the Dibrugarh (Lok Sabha constituency) in the general elections of 2014. He was elected to Assam legislative Assembly during 2001-2006 and 2006-2011 for from Duliajan in district of Dibrugarh. He lost 2011 assembly elections by around 3000 votes to Amiya Gogoi. In the Indian general election, 2014 he was elected as a member of parliament from Dibrugarh constituency.