Dedicated Freight Corridor Corporation of India (DFCCIL), a public sector undertaking corporation run by the Indian Railways, has decided to terminate project contracts awarded to Beijing National Railway Research and Design Institute of Signal and Communication Group, citing poor work progress. Taking about the development, Railway Board chairperson, VK Yadav told news agency ANI that the contract was awarded in 2016 and it had a completion period of 3 years but only 20 per cent work was done therefore the contract had to be terminated.

"It should have been completed by Aug 2019 but only 20% work has been done. Therefore Dedicated Freight Corridor Corporation of India took the decision to terminate the contract," he said.

The India-China standoff has stirred anti-China sentiments in India, with protesters and some trade bodies like CAIT calling for a boycott of Chinese products in protest to border standoff. 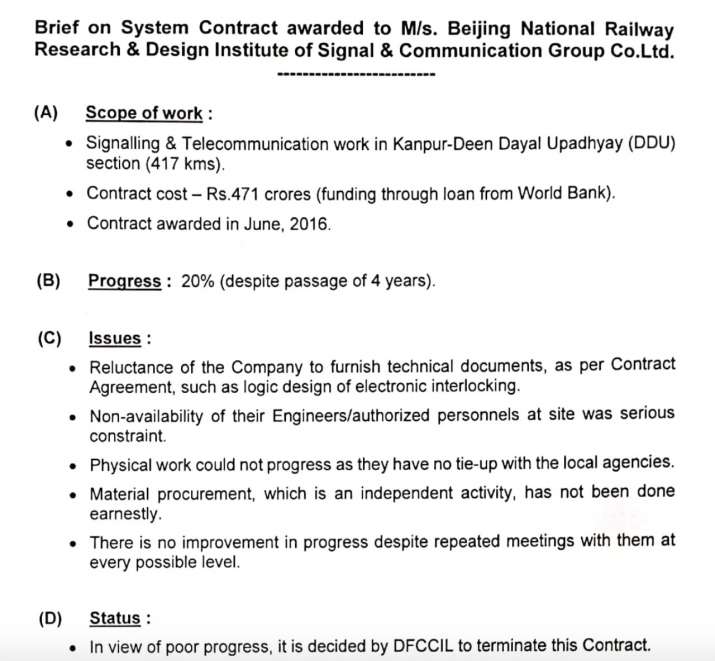 Earlier, The Telecom Ministry has ordered BSNL, MTNL and other private companies to ban all Chinese deals and equipment. They have been asked to avoid Chinese equipment in upgradation. The decision by the Telecom ministry could play a major role in the 4G upgradation purchases by its subsidiaries.

Twenty Indian Army personnel were killed in a face-off in Ladakh's Galwan Valley on the night of June 15-16, the Army. Four more Indian soldiers who were in critical condition, are now stable.

China has not denied claims that there were casualties on its side too.

In a brief statement yesterday, Prime Minister Narendra Modi said that India wants peace, but is capable of giving a befitting reply if instigated. He has called an all-party meet on June 19 to discuss the situation.