Ankita Lokhande walked down memory lane to share some old videos from Pavitra Rishta. The show cast her as the lead opposite late Bollywood actor Sushant Singh Rajput.

Actress Ankita Lokhande, who's known for playing Archana in the popular TV show Pavitra Rishta, walked down memory lane to share some old videos from it. The show cast her as the lead opposite late Bollywood actor Sushant Singh Rajput. Taking to her Instagram stories, Ankita posted 2 a black and white video with clips from the show with Parineeta song, 'Piyu Bole' playing in the backdrop. It is a fanmade video shared by the actress.

Apart from this, the actress also posted a monochrome photo of her character on her Instagram stories. Take a look: 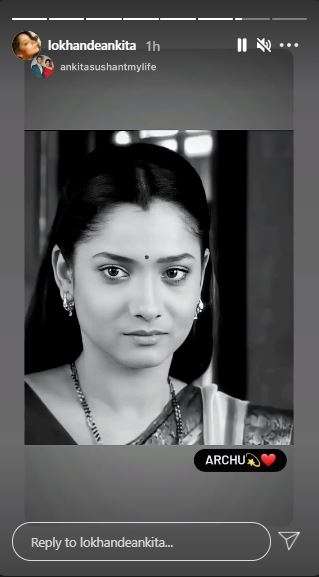 Ankita Lokhande and Sushant Singh Rajput became a popular television couple after appearing together on the daily soap. Although Sushant left the show midway to pursue a career in Bollywood, they reportedly dated for almost six years before calling it quits.

The show once again came to highlight post Sushant's tragic death last year. The CBI, NCB and EC are among other investigating agencies that have been looking into the death case of the actor. As per the latest update, the Narcotics Control Bureau (NCB) on Friday said that it has arrested Sidharth Pitani, flatmate of late Bollywood actor Sushant Singh Rajput in a drug related case.

The arrest comes almost two and half months after it filed a 12,000-page charge sheet against 33 people, including actress Rhea Chakraborty, her brother Showik and others in the Bollywood-drugs mafia probe case linked to Sushant's death on June 14, 2020, when he was found hanging in his flat.

On March 5, the NCB charge sheet was filed before a Mumbai Special NDPS Court, following two cases registered by the drug law enforcement agency after an intimation from the Enforcement Directorate which was probing the financial angles in Sushant's death.

Coming back to Ankita, the actress was recently seen in Baaghi 3, sharing screen space with Tiger Shroff, Riteish Deshmukh and Shraddha Kapoor.