The chief ministers of 18 states where the BJP and its allies are in power and several union ministers are also likely to attend the ceremony.

Vijay Rupani was today sworn in as the chief minister of Gujarat for the second consecutive term after the BJP won the recently-held Assembly elections in the state.

Rupani, 61, and his deputy Nitin Patel were administered the oath of office and secrecy by Governor O P Kohli at a grand ceremony in Gandhinagar.

Before the swearing-in ceremony, Rupani, sporting an orange-coloured jacket, and Patel greeted the chief ministers of BJP-ruled states who came to attend the ceremony.

Rupani and his wife also offered prayers at the Panchdev Mahadev temple here before the swearing-in ceremony.

Gujarat swearing-in ceremony - As it happened:

12:09 pm: Kumar Kanai takes oath. He will be a part of the cabinet for the first time, after registering a big victory from Varachha seat.

12:08 pm: Raman Patkar takes oath. He won from the Umargam seat for the fifth time, and is a big Tribal leader.

12:07 pm: Vibhavari Dave takes oath. She is only female minister in the Gujarat cabinet who won from the Bhavnagar East seat.

12:06 pm: Vasanbhai Ahir takes oath. He is a famous face of the Ahir community in the state.

12:05 pm: Ishwar Singh Patel takes oath. He is a powerful face of the Koli community.

12:03 pm: Jaydrath Singh Parmar takes oath. He has served as Cabinet minister in last three governments, and is a renowned face of the Kshatriya community.

11:59 am: Purushottam Solanki takes oath. He is the biggest face of the Koli community, has been been minister in Keshubhai and Rupani-led governments.

11:45 am: Five-time MLA Saurabh Patel, who won from Akota, inducted in Rupani government.

11:37 am: Vijay Rupani takes oath as Gujarat Chief Minister. This will be his second term.

11:26 am: Bihar Chief Minister Nitish Kumar is also present at the swearing-in ceremony. 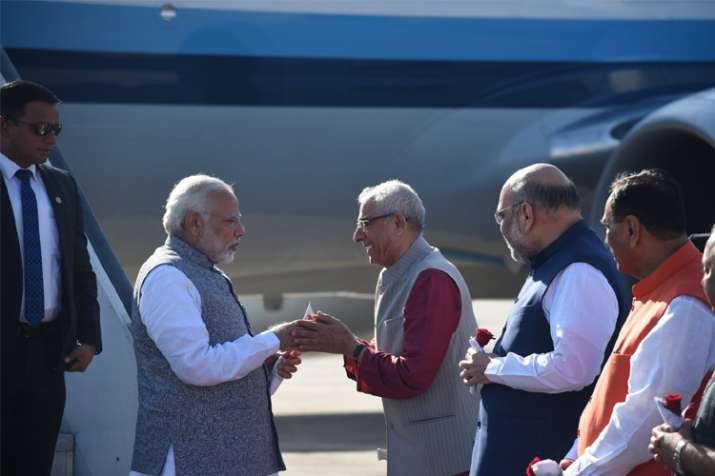 Prime Minister Narendra Modi waves to crowd gathered on his way from the airport in Ahmedabad pic.twitter.com/uXJ3u0UBhP

On December 23, the state BJP leaders met Governor OP Kohli and staked claim to form the government.  The governor accepted the BJP’s claim and asked the party to form the next government.

Rupani and Patel were elected respectively as the leader and the deputy leader of the BJP legislature party on December 22, in presence of central observers - Finance Minister Arun Jaitley and the party’s general secretary Saroj Pandey.

The BJP secured a simple majority by winning 99 seats in the 182-member Assembly in the recently-held elections.  The party’s tally this time came down by 16 seats. It had secured 115 seats in 2012.

This is the sixth consecutive time that the BJP has won the elections in Gujarat.

The opposition Congress, which won 61 seats in 2012, managed to increase its tally to 77 this time. With its allies, the Congress’ strength in the Assembly is up at 80 seats.