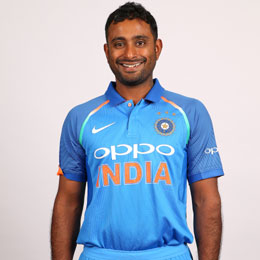 Ambati Rayudu was born in Guntur in Andhra Pradesh in 1985 and has been around the circuit for a while. Rayudu emerged as a teenage prodigy and smashed an unbeaten 177 while opening the batting as India Under-19s completed a clean sweep of a one-day series in England in 2002. Under Rayudu, India reached the semi-finals of the 2004 U-19 World Cup, where they lost to eventual champions Pakistan. He played for Hyderabad in Ranji Trophy but soon move to Andhra Pradesh after a disappointing season in 2004 and a rift with the coach. However, at 21, he went on to play the rebel Indian Cricket League (ICL) in 2009 after being ignored for selection. His career got a fresh lease of life in 2009 when he got an amnesty from the BCCI and returned to the domestic setup. Since then, Rayudu hasn't looked back and has consistently been making runs in first-class cricket and the IPL. He has scored close to 300 runs in every single edition of the IPL, barring the 2017 season in which he missed a number of games due to a groin tear. As if to compensate for last year's disappointment, Rayudu hit 605 runs in IPL 2018 alone forcing the selectors to take notice and get a call-up in the Indian ODI set up as they looked for a No.4 ahead of the World Cup.

Chasing 378, West Indies simply caved in against India's clinical bowling attack on what was a batting-friendly wicket to be bundled out for a paltry 153 in 36.2 overs.

India notched up 321 for six, while the West Indies, needing 14 runs in the final over and five off the last ball, levelled the score with Hope (123 not out) cutting Umesh Yadav for a boundary.

Making mockery of what looked like a stiff 323-run target, the home team cantered to the win with 7.5 overs to spare, taking a 1-0 lead in the five-match series.