As the day progressed, the unruliness and disorder gathered momentum. And it reached its crescendo when thousands of 'farmers' barged into the highly guarded Red Fort (Lal Quila) in old Delhi. Tractors were driven straight inside the iconic monument.

The day started with proud images of Republic Day celebrations from across the country. Just as India's military might and cultural diversity were on display at the Rajpath during the traditional January 26 parade, reports of protesting farmers defying police orders started pouring in from Delhi borders. Soon, it became amply clear that things were going to turn ugly, and it happened rapidly.

By the time the Rafale jets concluded their spectacular show over Rajpath in Central Delhi, violent mobs had entered the national capital breaking barricades put up by the police. Over the weekend the Delhi Police and farmer unions had agreed upon routes through which the planned tractor rally would pass. However, on Tuesday all the agreements were thrown down the gauntlet.

From Singhu border to Gazipur, from Nangloi to Akshardham there the crowd challenged the police forcing the security men to resort to lathicharge and fire tear gas shells. Tractors were used to break open the concrete barriers. 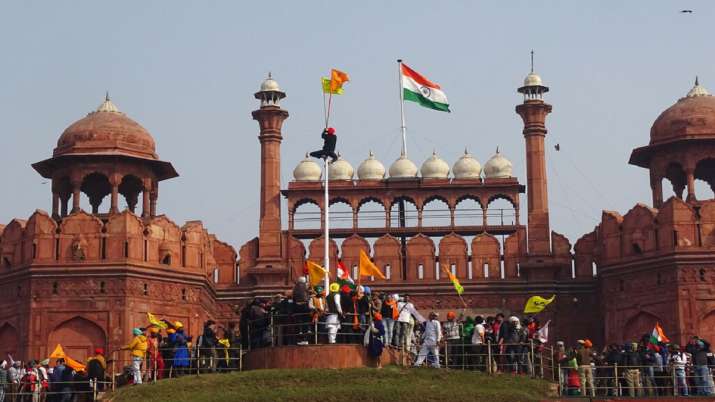 As the day progressed, the unruliness and disorder gathered momentum. And it reached its crescendo when thousands of 'farmers' barged into the highly guarded Red Fort (Lal Quila) in old Delhi. Tractors were driven straight inside the iconic monument. As the crowd continued to swell, a group of people hoisted flags from a few domes of the Red Fort in what was a never-seen-before moment.

Television channels also flashed videos of tractors being driven violently and attempts being made to run over policemen who tried to stop the crowd at ITO. A bus was also vandalised by the mob proving that the promises by farmer leaders of a 'peaceful' march were nothing but fictitious claims.

Violence will serve no purpose

Thousands of farmers from Punjab, Haryana and western Uttar Pradesh have been camping at the several borders of the national capital since November 26, 2020 demanding that the three farm laws be repealed. Several rounds of talks have remained inconclusive as the farmers remain adamant on their demands despite the Centre proposing to suspend the implementation of laws for 18 months.

The protesting 'farmers' may well consider that their act of defiance has sent out a strong message to the Government, but the damage they have done to their own cause and the image of the country on the occasion of Republic Day will be remembered for long.