Several parts of Maharashtra including Mumbai have been witnessing heavy rains for the last few days, trigger landslides. Raigad, Ratnagiri and Satara are the worst affected.

Ninety bodies have been retrieved and over 100 people are still missing following landslides triggered by heavy rainfall in the coastal regions of Maharashtra. According to the National Disaster Response Force (NDRF), the NDRF is operating in three landslide-affected districts of Raigad, Ratnagiri and Satara. NDRF rescuers have retrieved a total of 90 bodies from these areas, with the highest number of 47 being from the worst-hit Taliye village under Mahad tehsil of Raigad.

NDRF said that teams are constantly engaged in rescue and relief work since the last few days and so far they have rescued more than 3,100 stranded people and evacuated 1,250 persons to safer places during current floods.

The force has deployed 34 teams for relief and rescue operations in the affected regions of Mumbai, Kolhapur, Thane, Palghar, Sangli, Sindhudurg, Nagpur and Pune apart from the three districts mentioned earlier. Rescuers were also assisting civil administration in the distribution of relief items and restoration of power supply to bring normalcy in the affected areas. 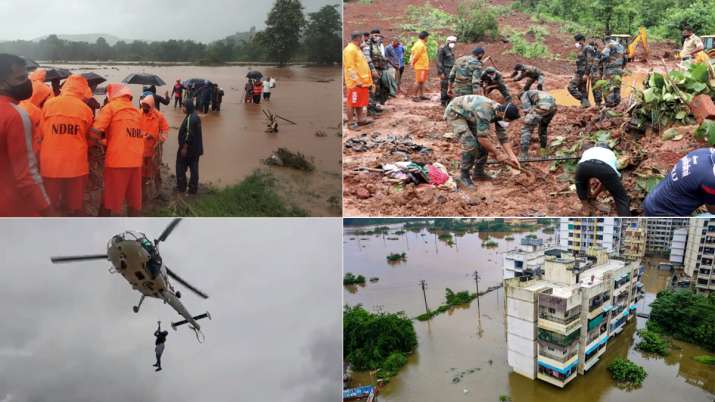 According to the state government data, the number of deaths due to flooding, landslides and other rain-related incidents in parts of Maharashtra reached 149. More than 100 people were missing after the monsoon fury. So far, 50 people have also been injured in these incidents, it said in a statement.

Meanwhile, several state and National Highways in Maharashtra have been shut due to rains. While the Mumbai-Bengaluru highway was partly submerged near Kolhapur, the Kolhapur-Pune, Mumbai-Goa, Kolhapur-Ratnagiri were also also shut in patches in Ratnagiri, Kolhapur and Sindhudurg.

Chief Minister Uddhav Thackeray has said that wiill announce a relief package after conducting a complete review of the flood-affected districts. He is likely to visit areas in western Maharashtra today to review the damage.

"A complete review of all districts, such as Raigad, Ratnagiri, Sindhudurg, Satara, Sangli and Kolhapur, will be taken in the next few days and the relief package will be announced,” he said.

The CM said that his government will also put in place a flood control system to tackle such incidents better. A system on the lines of the NDRF will be created in all the affected districts so that they can carry out relief and rescue operations before the NRDF or other agencies reach for assistance. Also, the State Disaster Response Force (SDRF) will be strengthened, he said.