​A cyclone will come rolling into Tamil Nadu and Puducherry as a severe storm on Wednesday, bringing the state to a halt.

A cyclone will come rolling into Tamil Nadu and Puducherry as a severe storm on Wednesday, bringing the state to a halt. Chhristened 'Nivar', the cyclone was very likely to cross the coast between Karaikal in Puducherry and Mamallapuram over 50 kilometers from Chennai late Wednesday evening as a severe cyclonic storm with a wind speed of 100-110 km per hour gusting to 120 kmph, the India Meteorological Department said. According to the forecast, rainfall is very likely at most places in Tamil Nadu, Puducherry and Karaikal, near Nagapattinam, on Wednesday with heavy to very heavy showers at a few places and extremely heavy rainfall at isolated places under the influence of the cyclone, the first one to form since the onset of the northeast monsoon on October 28.

Tuesday saw intermittent rains in several parts of the state and the UT with multiple state and central agencies, including the Coast Guard, the National Disaster Response Force, the Fire and Rescue Services, deploying their assets and personnel to tackle the cyclone's fury.

Meanwhile, Prime Minister Narendra Modi on Monday spoke to Chief Ministers of Tamil Nadu and Puducherry K Palaniswami and V Narayanasamy respectively on the situation arising out of the cyclone and assured them of all possible support from the Centre.

About 1,200 National Disaster Response Force (NDRF) rescue personnel have been deployed in Tamil Nadu, Andhra Pradesh and Puducherry and 800 others are on standby. At least 50 NDRF teams have been earmarked for combating any situation emerging out of the cyclone. An NDRF team typically comprises about 40 rescue troopers. 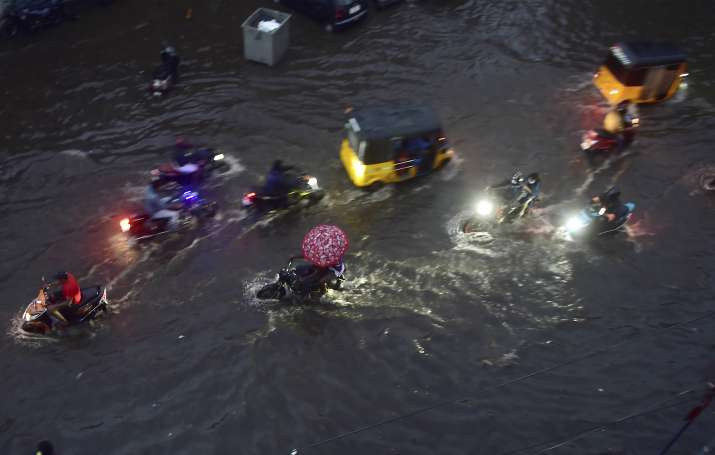 A total of 22 teams have been pre-deployed while eight are on standby in the two affected states of Tamil Nadu and Andhra Pradesh, and in the Union Territory of Puducherry. Out of these 30 teams, 12 are deployed in Tamil Nadu, seven in Andhra Pradesh and three in Puducherry. An additional 20 teams will be on standby to be airlifted from locations such as Cuttack (Odisha), Vijaywada (Andhra Pradesh) and Thrissur (Kerala).

What may be hit