The Delhi High Court said that if the government wants it can do anything and can even make "heaven meet earth".

As the handling of the raging Covid pandemic by authorities came under increasing judicial scrutiny, the Supreme Court on Thursday said it expected the Centre to come out with a "national plan" on supply of oxygen and essential drugs for treatment of infected patients and method and manner of vaccination against the disease.

While the top court 'suo motu' (on its own) took note of the "grim" situation in the country and the havoc caused due to shortage of oxygen cylinders in hospitals, the Delhi High Court observed, "We all know that this country is being run by God," a day after it came down heavily on the Centre over the COVID-19 management.

The high court further said that if the government wants it can do anything and can even make "heaven meet earth".

Shortly after the court made the observation, the Supreme Court Bar Association (SCBA), through its President and senior advocate Vikas Singh, filed a plea seeking to intervene as a party in the suo-motu case titled "Distribution of Essential Supplies and Services During Pandemic", and said under the given situation, the high courts are best suited to deal with local issues.

"The situation in various parts of the country is grim. There seems to be a sudden surge in the number of COVID patients and mortality. Other than vaccination which is prophylactic in nature, COVID can be treated only by some drugs such as Remdesivir. Oxygen to the patients is also said to be an essential part of the treatment," said the CJI-led bench, also comprising Justices L N Rao and S R Bhat.

It noted that drugs, oxygen and vaccination availability and distribution are being carried out by the governments, including the Centre, according to the protocols established by the health authorities.

"Nonetheless, it seems that a certain amount of panic has been generated and people have invoked the jurisdiction of several high courts in the country seeking various reliefs such as Delhi, Bombay, Sikkim, MP, Calcutta, Allahabad and Gujarat," the court said.

"What is happening is that it is creating some kind of confusion and diversion of resources," the bench observed. At the same time it said these high courts are exercising their jurisdictions in bona fide and in the best interest.

The apex court also appointed senior advocate Harish Salve as an amicus curiae to assist it in the suo motu proceedings.

"We, as a bench and as a court, wish to take suo motu cognisance of certain issues," the bench told Solicitor General Tushar Mehta.

The court said prima facie the distribution of essential services and supplies(during pandemic) must be done in an even handed manner according to the advice of the health authorities which undoubtedly take into account relevant factors like severity, susceptibility, the number of people affected and the local availability of resources.

"We expect the Central Government to place before this court a national plan for dealing with the above services and supplies during pandemic," it said.

The court directed that notices be issued to the Union Government, the State Governments/Union Territories and the parties, who appeared to have approached the high courts, to show cause why uniform orders be not passed by this court in relation to : a) supply of oxygen; b) supply of essential drugs; c) method and manner of vaccination and d) declaration of lockdown. The notices are returnable on Friday.

The top court had on Tuesday stayed the Allahabad High Court order directing the Uttar Pradesh government to impose strict restrictions till April 26 in five cities due to the surge in cases.

The Delhi High Court observed that the COVID-19 situation in the national capital has turned "precarious" with many hospitals running out of oxygen and directed the Centre to ensure that the gas is supplied to the city as per the planned allocation and without any hindrances. 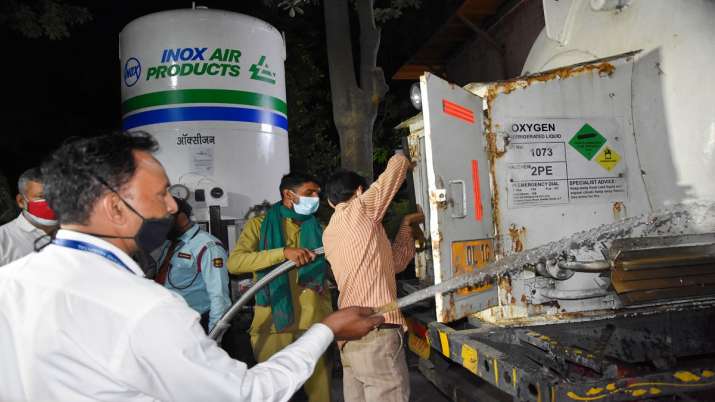 The Bombay High Court also directed the Centre and the Maharashtra government to file their respective replies by May 4 on the management of available resources, including hospital beds, Remdesivir drug, vaccines and oxygen, to tackle the pandemic.

It asked the Union Government to reconsider its stand that door-to-door COVID-19 vaccination was not feasible, saying it must consider the plight of old people and the disabled.

The Gujarat High Court asked the state government to formulate a policy for the distribution of Remdesivir injections to hospitals in view of the high demand of the key anti-COVID drug.

The hearing on a PIL taken up suo motu on the COVID-19 situation was conducted by the court via video conference on April 20 and a detailed order was made available on Thursday.

At present, Remdesivir injections are used "in the order of preference which apparently is need-based and in priority of hospital", the high court said in its order.