In view of the recommendations of the Student-Teacher Committee of the Department, Prof Sarkar has been divested of his teaching duties with immediate effect, an official University notice said.

A professor at Kolkata's premier Jadavpur University (JU), who had stoked a major controversy by making comments on virginity of women on Facebook, has been divested on his duties.

International Relations' professor Kanak Sarkar likened a woman's virginity to a "sealed bottle" or "packet" in a Facebook post on Sunday, triggering a furore on social media and academic circles. Though he was quick to delete the post, screenshots of it went viral.

In view of the recommendations of the Student-Teacher Committee of the Department, Prof Sarkar has been divested of his teaching duties with immediate effect, an official University notice, issued on Wednesday by HoD International Relations Prof Omprakash Mishra said.

The professor, in his post, wrote: "Are you willing to buy a broken seal while purchasing a bottle of cold drink or a packet of biscuits? It is the same case with your wife.

"A girl is biologically sealed from birth until it is opened. A virgin girl means many things accompanied as values, culture, sexual hygiene. To most boys, virgin wife is like angel."

Facing criticism from all quarters, a defiant Sarkar appeared to justify his comments, asserting it was intended for "fun" among a social media group of friends and "not for public consumption".

"Someone took a screenshot of the post and forwarded it, which triggered the response. I did not intend to hurt anyone's sentiment or insult any woman," he said.

He also said according to a Supreme Court order every individual is entitled to express his opinion.

A student of his department alleged that Sarkar made similar "sexist comments" on social media in the past as well.

"During classes, he had created an uncomfortable situation for woman students. We don't feel secure in his presence in the department," she said. 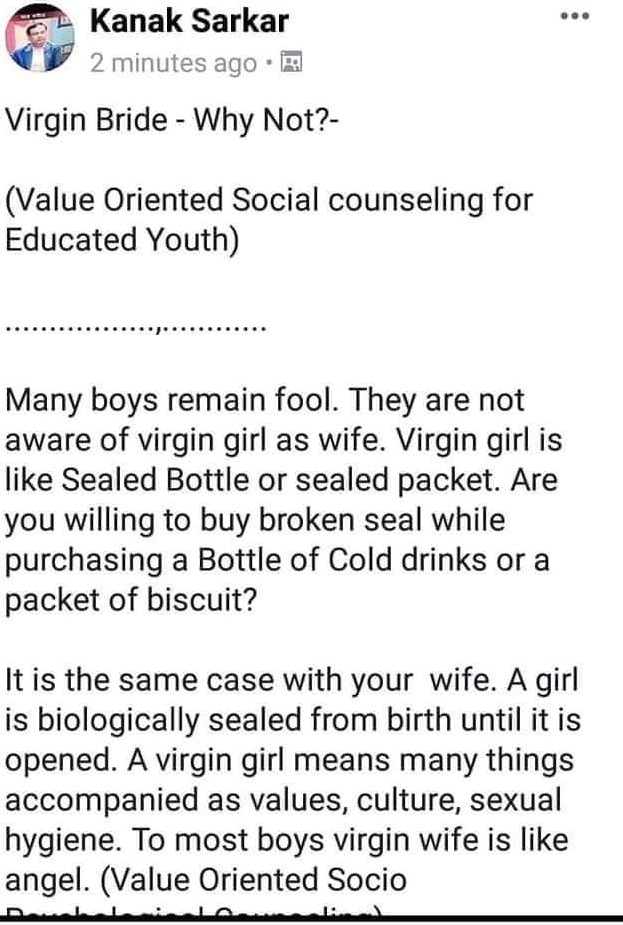