The shoot of Akshay Kumar and Kriti Sanon's most anticipated film Bachchan Pandey has officially begun on Wednesday. The team kickstarted rolling cameras with the traditional mahurat shoot in Jaisalmer.

The shoot of Akshay Kumar and Kriti Sanon's most anticipated film Bachchan Pandey has officially begun on Wednesday. The team kickstarted rolling cameras with the traditional mahurat shoot in Jaisalmer. Film's producer Sajid Nadiadwala, who was accompanied by his wife Wardha did the customary breaking of the coconut while his sons posed with the film's clapperboard.

Sajid's wife Warda took to her social media account and shared the pictures from the shoot and poured in her wishes for the whole team, she wrote, "Muhurat shot done. Congrats to you all. Good luck team #BachchanPandey @sknadiadwala @snadiadwala1 Don't miss Ms. tod fods."

Bachchan Pandey's lead actress Kriti Sanon also shared a glimpse of the film’s clapper board on her Instagram stories. 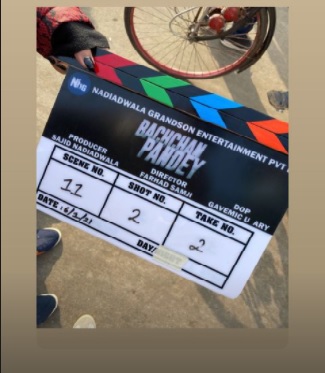 The cast and crew of the film took off to Jaisalmer on Saturday. Kriti shared pictures of the team from the flight and announced that they will soon commence the shoot for the film.

Kriti expressed her excitement as she along with Nadiadwalas had shot for 'Housefull 4' in Jaisalmer. "Super excited!! And full deja vu happening to go to the exact same place we shot Housefull4 in!! Jaisalmer it is! #BachchanPandey," she wrote on Twitter. Directed by Farhad Samji, the film will be reportedly shot in places like Gadisar Lake and Jaisalkot.

Recently, Kriti also shared a video from the sets where she could be seen riding a bike. "Four wheels... Move the body...Two wheels...Move the soul.. P.S. I always wanted to ride a bike with this song playing in the background!" Kriti captioned the clip.

Bachchan Pandey is an action-comedy where Akshay Kumar plays the role of a gangster, who aspires to be an actor and Kriti Sanon portrays a character of a journalist, who wishes to be a director.

Bachchan Pandey was initially scheduled to release on Christmas 2020, however, it had to be postponed due to the lockdown. Farhad Samji, best known for Housefull 4, will direct the movie. The film is produced by Sajid Nadiadwala's banner Nadiadwala Grandson. The film also stars Pankaj Tripathi, Arshad Warsi and Jacqueline Fernandez in leading roles.