All is not well between Sushmita Sen's brother Rajeev Sen and his wife Charu Asopa. The duo tied the knot on June 7, 2019 and before celebrating their first wedding anniversary together, rumours of their separation started doing rounds on the internet.

All is not well between Sushmita Sen's brother Rajeev Sen and his wife Charu Asopa. The duo tied the knot on June 7, 2019 and before celebrating their first wedding anniversary together, rumours of their separation started doing rounds on the internet. The actors have even deleted all their Instagram pictures together from the platform. There were rumours lately that the two have decided to part ways but it looks like they are reconciling. Rajeev Sen on Tuesday shared a screenshot of his video call with Charu Asopa and wrote, "Hi Charu, Hi Rajeev. To all our fans who love us unconditionally."

It is said that Rajeev Sen had left his Mumbai home two months before their first wedding anniversary and is now staying in Delhi. While Charu is staying at their home in Mumbai. 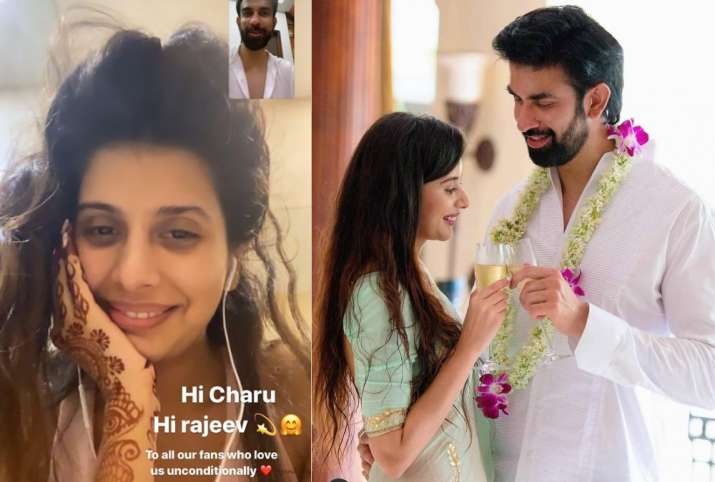 A few days ago, Rajeev in an interview said that 'someone is brainwashing her' which has resulted in fights between them. On the other hand, Charu exclaimed that nobody is brainwashing her. Charu told TOI, "No one is brainwashing me. I am mature enough to make my own decisions - something that I have always done. Maybe, he was brainwashed into deleting our pictures from his social media handles."

She added, "If he thinks that I am innocent and gullible, and could be influenced by those around me, why did he leave me to live on my own during these tough times? This is the time for families to come together and be by each other's side. But, Rajeev moved out and flew to Delhi a few days before our first wedding anniversary. It's been two months now. Why would he do that?"

"There is no cure for doubt. What led to this and the issues in our relationship... there is a lot that I can talk about, but I don't want my personal life to become a public spectacle. I don't want it to become a part of anyone's gossip session."

It all started when Charu Asopa dropped 'Sen' from her surname and gave rise to separation rumours. The actress has also been sharing emotional and cryptic posts on social media.