Indian Railways - held as the lifeline of the country- for being the principal mode of transportation in the country has brought massive news that raises hopes of a revival of the pandemic-battered economy.

Indian Railways - held as the lifeline of the country- for being the principal mode of transportation in the country has brought massive news that raises hopes of a revival of the pandemic-battered economy. In what can be seen as an extremely healthy indicator for the economy, Railways has posted a higher freight load in July when compared to the same period from last year. Railways posted an 80 per cent jump in food grains freight load, a clear sign of revival. Things also went up on coal, cement, iron, steel, foodgrains and fertilisers front.

The Indian Railways has inched ahead of 2019's freight loading in July. On July 27, it managed to load 3.13 MT of goods as compared to 3.12 MT on the same date last year, despite the challenges posed by the COVID-19 pandemic. Railways managed to turn the tables by implementing a series of measures like improving the average speed of freight train and by undertaking more than 200 infrastructure works during the past four months that resulted in improved movement.

However, the cumulative overall loading of freight trains remains 18.18 per cent less than last year. This, however, is likely to improve as Railways has successfully managed to bring down logistics cost for industry to match best international benchmarks.

In July, the average speed of freight trains was 45.03 kmph which is around double compared to last year's 23.22 kmph for the same month, the national transporter said.

Here's how Railways has improved output:

"These improvements in freight movements will be institutionalised and incorporated in the upcoming zero-based time table," Railway Board Chairman VK Yadav said in an online press conference. "These steps will lead to significantly higher freight traffic and earnings for the Railways and cost competitive logistics for the entire country," he said.

The Railways has set a target of achieving 50 per cent more freight loading in the current fiscal as compared to 2019-2020, Yadav said. 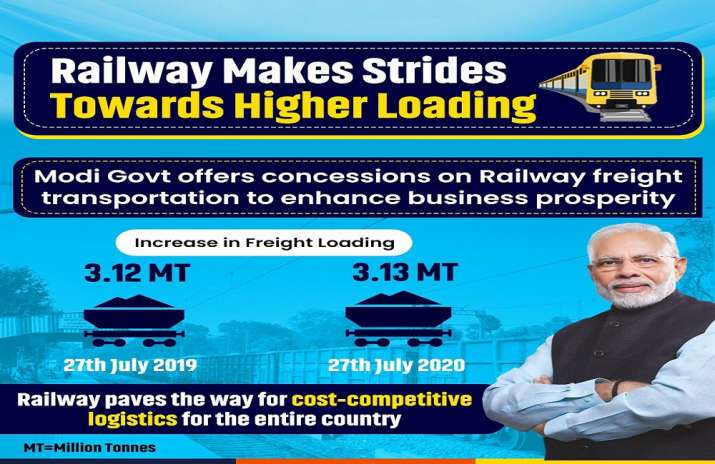 He also said that since last year, a number of concessions and discounts are being given by the Indian Railways to make its freight services more attractive for customers.

The Railways has achieved record loading of foodgrains, 80 per cent more than last year, and has introduced timetabled parcel services, the Railway Board chairman said.

He said that the Railways has set up multi-disciplinary business development units (BDU) at the Railway Board and Zonal levels. It has also empowered zonal chiefs to attract traffic.

The business development teams (BDT) will advertise and give wide publicity for generating demand, formulate traffic development proposals to draw newer clients from the industry.