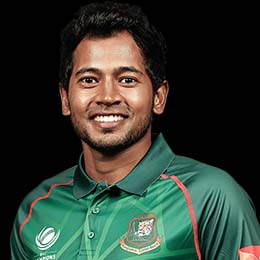 One of Bangladesh's key middle-order batsman, Mushfiqur Rahim is a live wire behind the stumps and since making his debut in Test cricket at the tender age of 16 at Lord's, the youngest ever, Rahim has been an integral part of the senior team. His consistent performances saw him as the first choice wicketkeeper in the 2007 World Cup in West Indies. He was awarded with a spot in the Test squad against Sri Lanka, where he hammered 80 runs in just his third Test. His contributions have been immense to Bangladesh and his moment of fame came when he smashed a quick ton against India in 2010, the fastest by any Bangladesh player. He was named captain in the 2012 Asia Cup and led Bangladesh to their maiden finals, but lost to Pakistan. He later on became the first Bangladesh player to smash a double hundred in Test cricket against Sri Lanka. He has played 63 Tests, 195 ODIs and 74 T20Is for Bangladesh, in which he has smashed five tons in Tests and 6 in ODIs. He also led Bangladesh to the World T20 finals, but were disappointed by India despite being close.