Paywall in the offing? Wikipedia asks Indian users to pay to 'defend independence'

Is Wikipedia going to impose a paywall? Will the users have to pay to access Wikipedia? All these apprehensions have cropped up after Wikipedia sought donations from Indian readers to "defend independence."

Is Wikipedia going to impose a paywall? Will the users have to pay to access Wikipedia? All these apprehensions have cropped up after Wikipedia sought donations from Indian readers to "defend independence." According to a message posted on Wikipedia, the platform asks its users in India to donate money starting ₹150 onward, however, it has options ranging till ₹3000 and above as per your choice.

"To all our readers in India, It's a little awkward so we'll get straight to the point: This Wednesday we humbly ask you to defend Wikipedia's independence. We depend on donations averaging about Rs 1000 but 98% of our readers don't give. If everyone reading this gave Rs 150 the price of one week's worth of coffee, we could keep Wikipedia thriving for years to come. When we made Wikipedia a non-profit, people warned us we'd regret it. But if Wikipedia became commcercial, it would be a great loss to the world. Wikipedia unites all of us who love knowledge: contributors, readers and the donors who keep us thriving. The heart and soul of Wikipedia is a community of people working to bring you unlimited access to reliable, neutral information. Please take a minute to help us keep Wikipedia online and growing. Thank you," the message read. It further asks you to select a payment mode including PayTm, Netbanking, RuPay and so on. 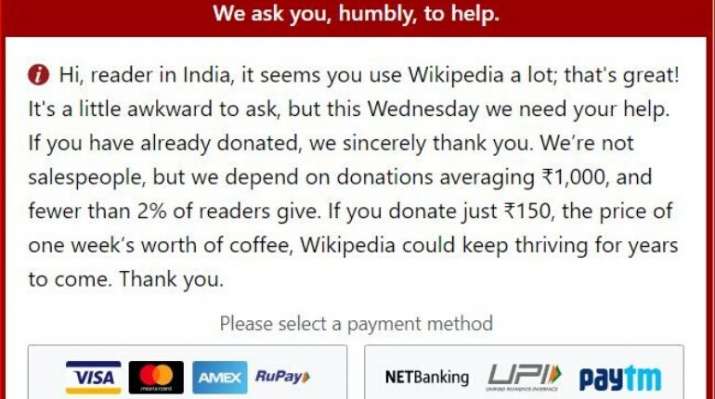 The Wikipedia's appeal for donations has raised concerns among the platform's users about the possibility of an imminent paywall. Wikipedia is a free online encyclopedia, created and edited by volunteers around the world and hosted by the Wikimedia Foundation.

Wikipedia, which depends on volunteers to write and edit, publishes content in several languages including Catalan, Swedish, German, French, Portuguese among several others.