India is all set to celebrate its 74th Independence Day. The mighty Red Fort is all decked up to hoist the Indian tricolour and the inter-services guard of honour is in marching readiness. Due to the COVID-19 implications, the celebrations might be low-key, but the same cannot be said about the progress India has made in these years. From technological development to education, from modernised armed forces to geo-political lobbying, we have come a long way from where we started. Our journey has had ups and downs, highs and lows, times of self-pride and reasons to self introspect, amid all this, India has grown as a nation.

India is all set to celebrate its 74th Independence Day. The mighty Red Fort is all decked up to hoist the Indian tricolour and the inter-services guard of honour is in marching readiness. Due to the COVID-19 implications, the celebrations might be low-key, but the same cannot be said about the progress India has made in these years. From technological development to education, from modernised armed forces to world diplomacy, we have come a long way from where we started. Our journey has had ups and downs, highs and lows, times of self-pride and reasons to self introspect, amid all this, India has grown as a nation.

Here are 15 monumental moments from the history of independent India. Moments which have been imprinted on India's DNA, moments which are likely to be never forgotten, moments which we shall cherish, and future generations after us, and pride themselves for being Indians. Moments which fill our hearts with pride and honour.

On 15th August 1947, India finally got independence from the imperial British rule that had ruled over the motherland for over 150 years. A freedom struggle that saw hundreds and thousands of bravehearts sacrifice their lives, finally reaped fruits. From Mahatma Gandhi's non-violence form of resistance to Bhagat Singh's fire with fire approach, they might have had different paths but their destination was the same -- independent India.

The roots of the Indian Institute of Technology (IIT) in India were laid down in 1948 when the then Thomason College of Civil Engineering was converted to the University of Roorkee, which later became the IIT Roorkee. To this day IITs remain India's top graduation institution for technology.

Our law of the land, our constitution, which remains the supreme literature that governs the country till this day, was enacted. It is because of this that we celebrate our Republic Day on 26th January. Here are some of the key features of our constitution.

The Indian general election of 1951–52, held from 25 October 1951 to 21 February 1952, was the first election to the Lok Sabha since India became independent in August 1947.It was conducted under the provisions of the Indian Constitution. The Indian National Congress (INC) won a landslide victory, winning 364 of the 489 seats and 45% of the total votes polled. This was over four times as many votes as the second-largest party. Jawaharlal Nehru became the first democratically elected Prime Minister of the country.

The Green Revolution in India refers to a period when Indian agriculture was converted into an industrial system due to the adoption of modern methods and technology such as the use of high yielding variety (HYV) seeds, tractors, irrigation facilities, pesticides, and fertilizers. It was mainly found by M.S. Swaminathan. This was part of the larger Green revolution endeavor initiated by Norman Borlaug, which leveraged agricultural research and technology to increase agricultural productivity in the developing world. Under the premiership of Congress leader Lal Bahadur Shastri, the Green Revolution within India commenced in 1965 that led to an increase in food grain production, especially in Punjab, Haryana, and Uttar Pradesh. Major milestones in this undertaking were the development of high-yielding varieties of wheat and rust-resistant strains of wheat. However, agricultural scientists like M.S. Swaminathan and social activists like Vandana Shiva are of the opinion that it caused greater long term sociological and financial problems for the people of Punjab and Haryana. 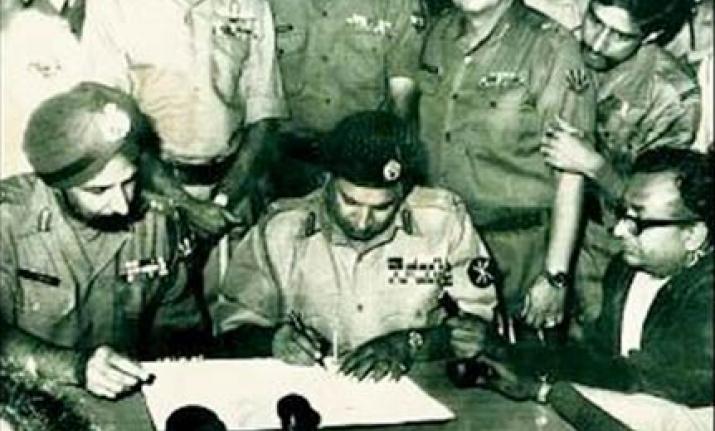 The brightest moment of Indian military history. The largest documented surrender ever. Over 80,000 Pakistani soldiers surrendered to the Indian Army which was led by then General, later Field Marshal Sam Hormusji Framji Jamshedji Manekshaw. The war began because of the atrocities carried out by the Pak Army in what was then East Pakistan, the Mukhti Yodhas rose up to liberate their country and won over the independence against all odds.

Aryabhata was India's first satellite, named after an ancient Indian mathematician (5th century AD). It was launched by the Russians on 19 April 1975 from Kapustin Yar. The 96.3-minute orbit had an apogee of 619 km and a perigee of 563 km, at an inclination of 50.7 degrees. Aryabhata was built by the Indian Space Research Organization (ISRO) to conduct experiments in X-ray astronomy, aeronomics, and solar physics. The spacecraft was a 26-sided polygon 1.4 m in diameter. All faces (except the top and bottom) were covered with solar cells. A power failure halted experiments after 4 days in orbit. All signals from the spacecraft were lost after 5 days of operation. The satellite reentered the Earth's atmosphere on 11 February 1992.

The 9th Asian Games were held from November 19, 1982, to December 4, 1982, in Delhi. 74 Asian and Asian Games records were broken at the event. This was also the first Asiad to be held under the aegis of the Olympic Council of Asia. Delhi joined Bangkok as the only cities to host multiple editions of the Asian Games up to this point. 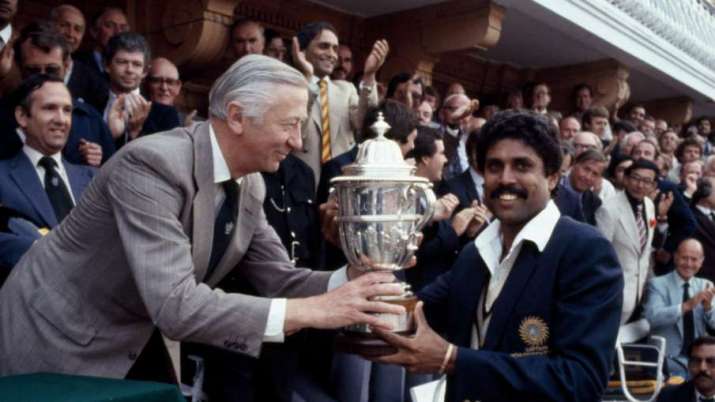 Kapil Dev-led team India lifted the third edition of the Cricket World Cup against all odds to give birth to a new obsession that would grip the hearts and minds of the Indian public until this very day. Kapil's men were up against a daunting West Indies in the final and it all looked gloomy until the captain himself took an absolute stunner of a catch -- which would go down in Indian history -- to dismiss Sir Viv Richards. Cricket then became a religion in India, something which is a reality to this day.

Manmohan Singh-PV Narasimha Rao duo will always be credited for opening the doors of the Indian economy in 1991. The economic reforms that were put into place then have led to India's economy and purchasing power grow by a whopping 1100 per cent in 28 years. 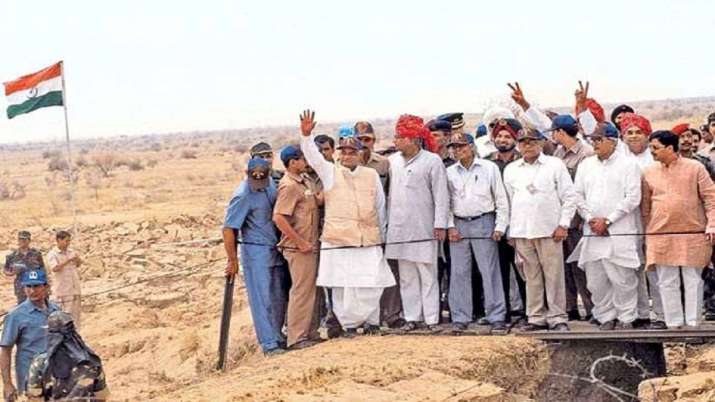 Under the Prime Ministership of Atal Bihari Vajpayee, in 1998 India tested 5 nuclear devises in the Pokhran region of Rajasthan. India announced to the world that she is now a nuclear power but has only tested the device for peaceful purposes. Shortly after India, Pakistan also tested nuclear devices and thus the nuclear arms race in South Asia began.

Less than a year after both India and Pakistan became nuclear powers, Musharaf's strategic miscalculation in Ladakh's Kargil region paved way for the fourth war between the two countries. Some would say that the war was limited to one sector, but that does not mean that the Indian Army did pay the price to come out triumph. The young officers and men of the Indian Army charged the Kargil heights with valour and pushed the Pakistani infiltrators back.

Chandrayaan-1, India's first mission to Moon, was launched successfully on October 22, 2008 from SDSC SHAR, Sriharikota. The spacecraft was orbiting around the Moon at a height of 100 km from the lunar surface for chemical, mineralogical and photo-geologic mapping of the Moon. The spacecraft carried 11 scientific instruments built in India, USA, UK, Germany, Sweden and Bulgaria. 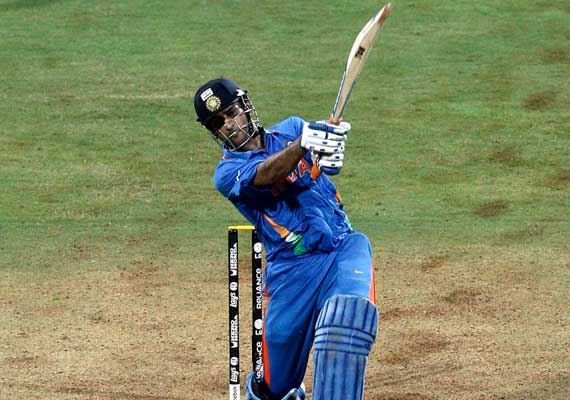 The ICC Cricket World Cup 2011, India playing at home, the massive weight of expectations -- Capital Cool Mahendra Singh Dhoni smashes Kulasekara for a six over long-on and a billion Indian celebrated in Joy as India lifted the Cricket world cup after 28 years. It was also a perfect setting of the sun on the exceptional career of batting great Sachin Tendulkar, who won the world cup in his sixth attempt. 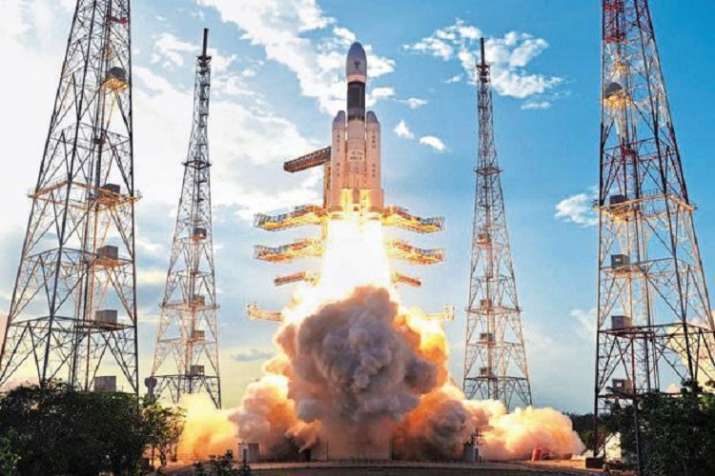 Chandrayaan-2 mission was a highly complex mission, which represented a significant technological leap compared to the previous missions of ISRO, which brought together an Orbiter, Lander and Rover with the goal of exploring south pole of the Moon. This is a unique mission which aims at studying not just one area of the Moon but all the areas combining the exosphere, the surface as well as the sub-surface of the moon in a single mission.