Vicky Kaushal and girlfriend Katrina Kaif are reportedly getting married at Six Senses Fort Barwara from December 7 to December 9. Till now there was no official confirmation or announcement about the same from the couple. However, it seems that the reports are true! The district administration of Sawai Madhopur has called for a meeting to review law and order preparations and crowd control measures during the high profile Bollywood wedding.

Vicky Kaushal and Katrina Kaif will reportedly seal their relationship by taking the wedding vows in Rajasthan. Apparently, their marriage will be held over three days at Six Senses Fort Barwara, in Sawai Madhopur from December 7 to December 9. Till now there has not been any official confirmation or announcement by the couple. However, it seems that the reports about their big day are true as the district administration has issued an order on Thursday and called for a meeting at 10.15 a.m. on Friday. The meet will be attended the superintendent of police, forest rangers, representatives from the hotel, and other officials. The aim behind the said is to review law and order preparations and crowd control measures during the high profile Bollywood wedding.

Strict measures are being followed by the celebs' team to make sure no picture or video from the event gets leaked. Meanwhile, it is being said that the lovebirds will have a court marriage today. Pinkvilla reported, "Katrina and Vicky will go in for a court marriage today or tomorrow in Mumbai attended by both their families. If they do get married, it will be under the Special Marriage Act, 1954 (for inter-caste marriages, court marriage is conducted under the Special Marriage Act)."

"The couple will have three witnesses to sign a declaration form in the presence of the marriage registrar and formalise their wedding. After their court marriage, Vicky and Katrina are expected to fly to Rajasthan over the weekend with their family and friends for the wedding and other events." 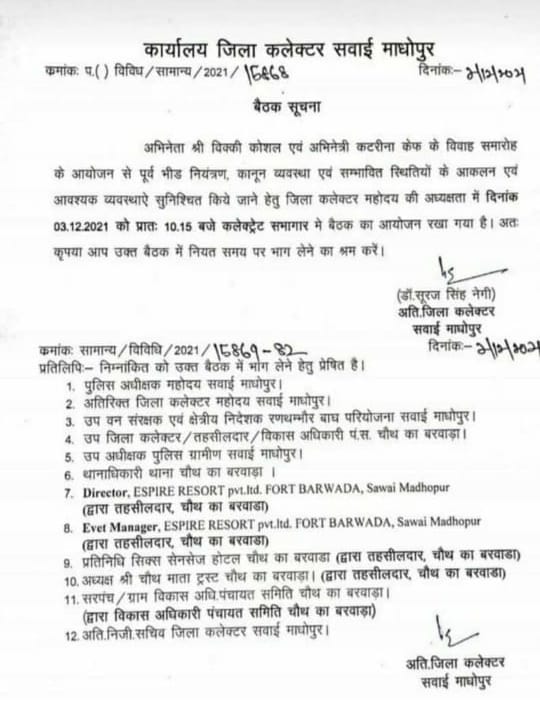 Their romance rumours began after Katrina, in an episode of 'Koffee with Karan', said that she would like to work with Vicky and they would look good together. On hearing this, Vicky was completely flattered and made a gesture of fainting. The duo has been spotted together at several events and occasions.

Recently, she made an appearance at a special screening of Vicky's film 'Sardar Udham'. Several reports earlier suggested that Vicky and Katrina got engaged in a hush-hush Roka ceremony at filmmaker Kabir Khan's house on Diwali.

On the work front, Katrina was last seen in Sooryavanshi and has Tiger 3 and films with Vijay Sethupathi and Amitabh Bachchan in her kitty. While for Vicky, he has projects like Sam Maneckshaw biopic 'Sam Bahadur,' Karan Johar's "Takht", and Aditya Dhar's directorial 'The Immortal Ashwatthama.'