Is this Aamir Khan or his brother Faissal Khan? Latest picture leaves netizens in confusion

Faissal Khan is all set to make his Bollywood comeback after a gap of 19 years with upcoming film Factory.

Do you remember Faissal Khan, Aamir Khan’s brother and actor, who was last seen in the Bollywood film Mela? The actor is all set to make his Bollywood comeback after a gap of 19 years with upcoming film Factory. Now, a picture of Faissal Khan has flooded the internet and left netizens in utter confusion.

In the viral photo, Faissal Khan is seen posing and smiling. The highlight is that he looks like a spitting image of his brother Aamir Khan, and some members of the social media believe it is, in fact, Aamir Khan and not his brother Faissal Khan.

Here’s the much-talked-about picture. What are your thoughts?

Remember #faizalkhan he has now turned a singer. Actor Faissal Khan will be heard crooning for the first time in his next film "Factory". Looking fit & fab, Faissal is remembered for his role in “Mela" . He will make his singing debut with a romantic number "Ishq Tera".

Look at how netizens can’t stop talking about the viral photograph. 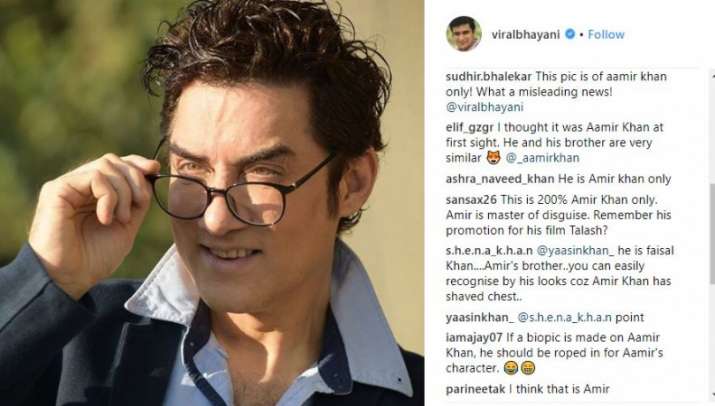 Meanwhile, Faissal Khan will also be singing one of the songs titled Ishq Tera for his comeback film Factory.

"Factory is my dream project. I was pleasantly surprised when my director Sharique Minhaj suggested that I should be singing this song. He insisted that my voice was required for this number and I had no qualms about singing at all. In fact, growing up in and around films and cinema, the ability to sing just came to me smoothly. Since Ishq Tera is a soft, romantic track it was easy to croon. Having heard the final number, I feel quite proud”, Faissal Khan was quoted as saying to PinkVilla.

In other news, Faissal Khan will also be seen in Sharique Minhaj's tentatively titled film Mental.

"It is a new-age film; especially for the generation next who are madly obsessed with a one-sided affair and who take wrong decisions which are very immoral. This film's subject is different from the earlier two films we did together. It revolves around a one-sided love affair and the guy goes at all lengths to win his love. He even becomes mental too. I believe in quality rather than quantity. I listen to the script first before giving my nod. When Sharique narrated the script and my role, I eagerly accepted to do it." Faissal said