Rujira Banerjee, a Thai national, is not new to controversies: Here's what happened in 2019

According to some reports, Rujira's father is a resident of Delhi's Rajouri Garden and owns a mobile gadget shop in Karol Bagh area. He also had business in Thailand, where Rujira was born.

Who is Rujira Banerjee? The Central Bureau of Investigation (CBI) summons to Trinamool Congress MP Abhishek Banerjee's wife Rujira has once again put focus on her after the Custom Department notice to her in 2019.

A Thai national, she has also been served notice by the Union Home Ministry in 2019 over "discrepancies" in her PIO card and other documents.

A day after issuing notice for questioning in connection with the illegal coal smuggling case, which the agency registered in November last year, the CBI held Rujira Banerjee 'Naroola' is acquainted with the "circumstances" of the coal theft case.

Responding to the CBI notice, Rujira, in a letter to CBI investigating officer Umesh Kumar, said that she would be available for the questioning at her residence between 11 a.m. to 3 p.m. on Tuesday.

According to CBI sources, the agency wants to investigate the allegations that some transactions were made in her bank accounts from main accused Anul Majhi alias Lala, who has been named in the CBI case.

Former Trinamool Congress Minister Suvendu Adhikari, who had joined the BJP two months back, had, terming Rujira as "Madam Naroola", accused her of being the recipient of money from Lala. Even on Monday, he claimed to soon release a diary of the "transactions of Madam Naroola".

Rujira, who holds an Overseas Citizen of India (OCI) card, first grabbed national attention in March 2019 after she was accused of obstructing a Customs officer at Kolkata's Netaji Subhas Chandra Bose International (NSCBI) airport, after being allegedly detained by the Customs officials for carrying gold in her check-in baggage.

Later, Abhishek Banerjee, who is nephew of Chief Minister Mamata Banerjee, refuted all the allegations by describing them as "baseless". The matter is now sub-judice as both the parties approached the court.

According to some reports, Rujira's father is a resident of Delhi's Rajouri Garden and owns a mobile gadget shop in Karol Bagh area. He also had business in Thailand, where Rujira was born.

According to Trinamool Congress leaders, Rujira, who keeps a low profile, had met Abhishek when they were studying at the (now-closed) Indian Institute of Planning and Management (IIPM) in Delhi and they were married in a lavish ceremony in the capital in February 2012.

However, following the brush with Customs, she came under the Union Home Ministry's scanner, which, on March 29, 2019, pointed out "discrepancies" in her PIO (person of Indian origin) card and marriage certificate. 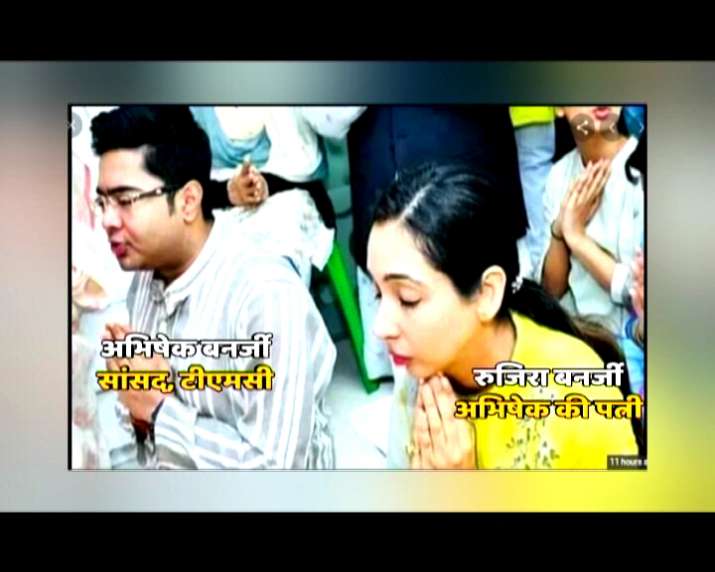 The notice, sent through Foreigners' Division of the ministry, sought clarifications from her within 15 days after the date of issue and threatened to take appropriate action if she failed to respond.

According to the notice, "Rujira, a Thai national, had been issued PIO card by Indian Embassy in Bangkok on 8 January, 2010 mentioning Niphon Naroola as father in the card. She applied for conversion of her PIO card into OCI (overseas citizenship of India) card in the office of FRRO, Kolkata and issued the OCI card on 8 November, 2017.

"One of the supporting documents submitted by Rujira to get her PIO card converted into OCI card was the certificate of her marriage with Abhishek which was issued on 13 February, 2013 wherein she mentioned Gursharan Singh Ahuja as her father."

"The central government has been further informed that on 14 November, 2019 Rujira applied for PAN card by filing Form 49A without intimating her real status as a Thai national holding OCI card and mentioning Gursharan Singh Ahuja as her father. She was actually required to fill Form 49AA to get a PAN by declaring herself as a foreigner holding an OCI card. On the basis of information given in her application Form 49A, she has obtained the PAN card under the name Rujira Naroola in the capacity of an Indian citizen," the notice said.

It said in light of the discrepancies, it was prima facie of the opinion that her registration of Rujira as an OCI card holder is liable for cancellation, and asked her to explain why she has made false representations and concealed material facts while submitting documents before the competent authorities to get her OCI and PAN cards.

However, there have been no further developments in this connection.

According to Abhishek's 2019 Lok Sabha election affidavit filed with the Election Commission, Rujira has Rs 5,01,644.48 as deposits in her bank account, as well as Rs 87,300 cash, gold jewellery worth Rs 22 lakh and paintings worth Rs 3 lakh. In 2019, before the elections, she had total assets worth Rs 35.55 lakh.

The CBI had registered a case against Lala and other unidentified people, including some employees of the Eastern Coalfields Ltd and of other Central government offices over coal theft and carried out raids in November last year and recently.