Before the release of Thalapathy Vijay starrer Master and Silambarasan TR aka Simbu starrer Eeswaran on the big screens, the Tamil Nadu government permitted 100 percent occupancy in cinema halls in the state.

Before the release of Thalapathy Vijay starrer Master and Silambarasan TR aka Simbu starrer Eeswaran on the big screens, the Tamil Nadu government permitted 100 percent occupancy in cinema halls in the state. The films are all set to recreate magic during Pongal 2021. According to the government, the decision was taken as the number of Covid-19 infections was coming down in the state. The government had earlier permitted theatres to screen movies with 50 percent occupancy. The decision came soon after Thalapathy Vijay personally met the Chief Minister and requested for the same ahead of his film Master's release.

While this is good news from the business perspective of the movies, not everyone liked the idea, considering the COVID19 pandemic. On Monday, a doctor named Arvinth Srinivas from Puducherry penned down a hard-hitting open letter addressed to Thalapathy Vijay and Silambarasan highlight that the pandemic isn't over yet.

He wrote, "Dear Actor Vijay sir, Silambarasan sir and the respected Govt. of Tamil Nadu,  I am tired. We are all tired. Thousands of doctors like me are tired. Health care workers are tired. Police officials are tired. Sanitary workers are tired.  We have worked so hard at the ground level to make sure the damage done is kept to as low as possible amidst an unprecedented pandemic. I am not glorifying our work for I know there is nothing so great about it to the onlooker’s eyes. We don’t have cameras in front of us. We don’t do stunt sequences. We aren’t heroes. But we deserve some time to breath. We don’t want to fall prey to someone’s selfishness and greed.

The pandemic isn’t over and we have people dying till today to the disease. A hundred percent theatre occupancy is a suicide attempt. Rather homicide, for none of the policy makers or the so called heroes are going to put themselves under the pump, to watch the movie amidst the crowd. This is a blatant barter system, trading lives for money.  Can we please slowly try and concentrate on our lives and make sure we tide through this pandemic peacefully and not reignite the slowly burning out flame, that is still not completely put out?

I wanted to make this post scientific and explain why we are still in danger. But that’s when I asked myself, “what’s the point?"

He signed off saying, "Yours tiredly ... A poor, tired resident doctor." 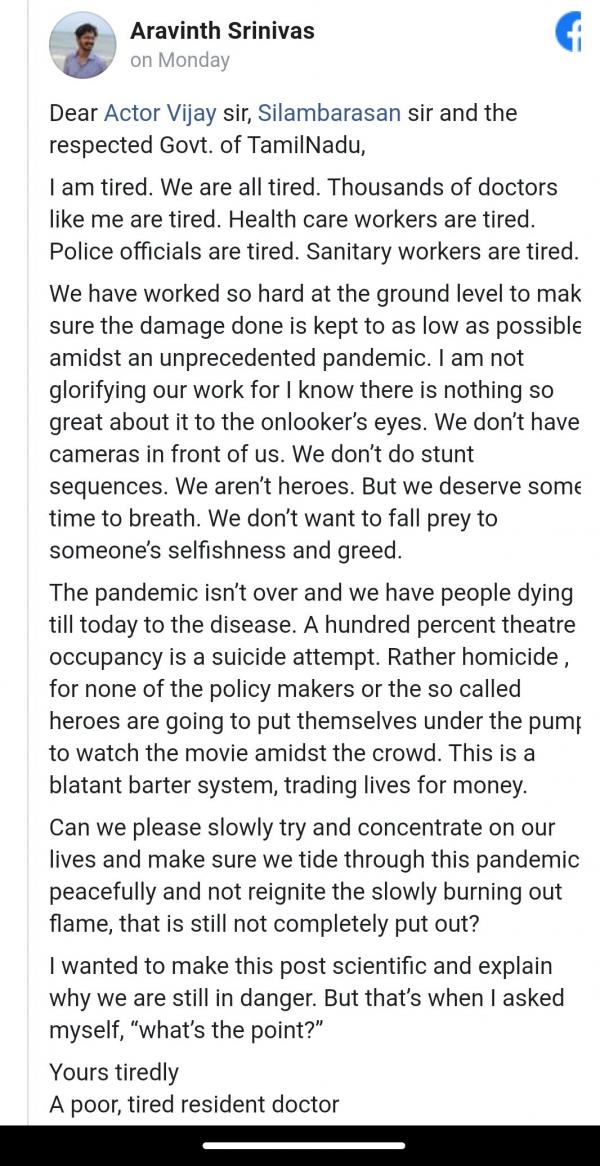 Earlier, actor Arvind Swami, who will be seen in Kangana Ranaut starrer Thalaivi soon, also voiced his opinions against the decision and said that 50 percent is better than 100 percent given the current situation in the country. He tweeted, "There are times when 50% is way better than a 100%. This is one of them."