The Jio smartphone, in collaboration with Google, is expected to launch this December and produce over 200 million smartphones by 2022

Reliance Jio is expected to launch a budget Android smartphone that could be priced below Rs. 5,000 for which it has been featuring in the rumour mill for some time now. Adding on to the list of rumours and leaks, we now have a possible name and specifications of the upcoming Jio smartphone. Read on to know more about this.

A Jio phone, with the codename Orbic (RC545L), has been found listed on the Google Play Console, as spotted by known tipster Mukul Sharma. The listing gives us an inkling that it is the Jio smartphone, which is expected to launch soon.

The listing reveals the basic details and suggests that the Jio smartphone could be powered by the Qualcomm Snapdragon QM215 with Adreno 306 GPU, which is a Qualcomm processor Android Go smartphones. This means the budget Jio smartphone will become part of Google's Android Go initiative. While the RAM configuration remains unknown, the smartphone is most likely to get 1GB or 2GB of RAM.

It is also hinted that the smartphone will run Android 10 and feature an HD+ screen resolution for the display that will get a screen density of 320dpi. Additionally, it shows the render of a smartphone with the old top and bottom bezels with capacitive buttons. 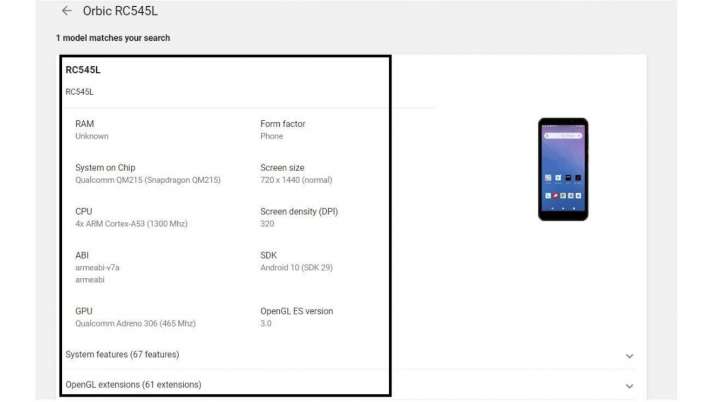 To recall, the Jio Android smartphone is expected to be priced at Rs. 4,000 so that more users switch to a smartphone and ditch 2G. This will yet again give Jio an edge over its competitors such as Realme, Xiaomi, and Samsung, much like it did with the competitive 4G prepaid plans.

The Jio smartphone, in collaboration with Google, is expected to launch this December and produce over 200 million smartphones by 2022. However, there is no confirmation on when exactly the Jio smartphone will launch. Further, Jio is likely to talks with Indian companies such as Lava, Dixon, and more for the manufacturing of the smartphone, thus, promoting the 'Atmanirbhar Bharat. initiative.

We will let you know once we get more information on this. Hence stay tuned.